Introduction to “Land of the Giants”

“Land of the Giants” is the evocative and well-earned nickname for the short tailwater section of the Missouri between Hauser Dam and Upper Holter Lake near Helena, Montana. This is the only section of the Missouri River that’s a critical part of our operations, though we run a few trips on other sections each year. Use this Land of Giants fishing guide to plan your trip, or book a guided trip to cut the learning curve.

Land of the Giants is a short four-mile section of river, but it’s very different from any other fishery in our operations area, including the rest of the mighty Missouri.

Over its short course, the Missouri at Land of Giants flows through two short, beautiful canyons and runs fast and deep. We run jet boat fishing trips here, though it’s hard water to access otherwise. Walter is our only regularly-available Land of Giants fishing guide, which should give some idea of the difficulty in getting on this water.

In addition to being somewhat exclusive, Land of Giants is also chock full of very large trout, with rainbows averaging 14 to 20 inches and browns running even larger. 4-5lb trout are common here and we expect to encounter them almost every day, hence the nickname “Land of Giants.”

Another reason this is a unique fishery is that it lacks a boat ramp at the upstream end. This means that fishing it from a boat requires motoring up from the lake downstream. Since the banks are rough and rocky and often crowded with anglers from nearby Helena and Great Falls, Montana jet boat fishing trips are by far the most popular method for visiting anglers to experience the spectacular fishing the area offers. No Land of Giants fishing guide uses any sort of other craft, nor does wade trips. 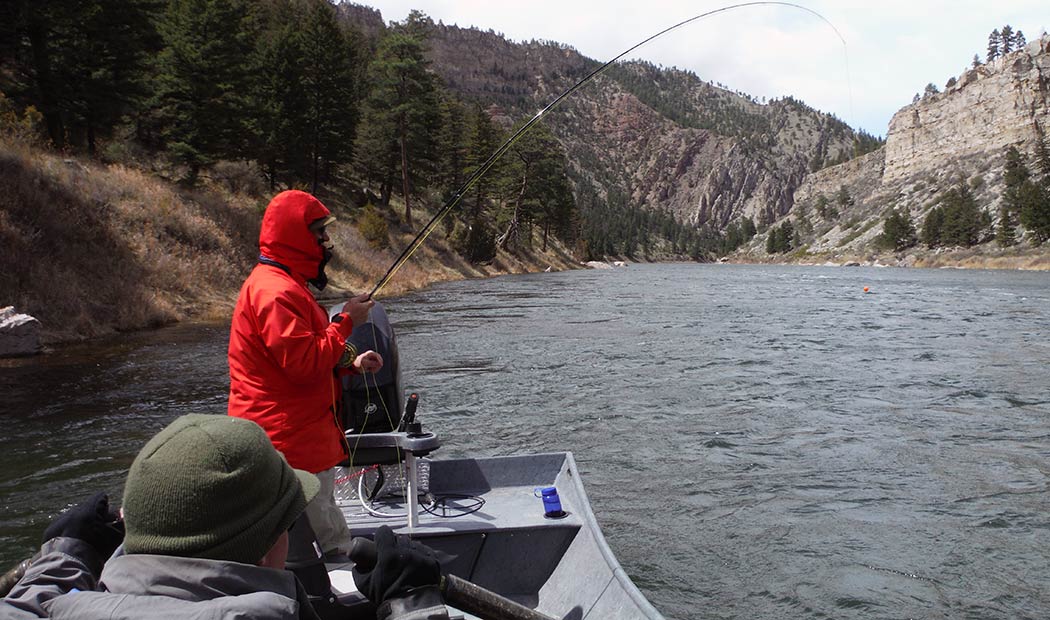 High canyon walls with interesting rock formations bound the Missouri River at “Land of the Giants” and can distract from the fishing, though not when you have a fish hooked.

One of the great advantages of Land of the Giants is that it offers excellent fishing for most of the year. In fact, wade-fishing this area is possible year-round. Ice at the marina on Upper Holter Lake where we launch the boat is the largest limiting factor in jet boat trip availability. We are able to offer jet boat trips from mid-March through November except when high winds make crossing Holter Lake hazardous.

Good fishing is possible through this entire period, though crowds are high in late April and early May and the fishing is more challenging in late summer and early fall. The peak fishing in our opinion is from mid-March through mid-April, from mid-May through mid-July, and from mid-October until it gets too cold to stand racing across a lake at 35mph in an open boat.

For Land of Giants fishing tips, click the button below.

“Land of Giants” is a short canyon-bound tailwater between Hauser Dam and Upper Holter Lake. The more-famous tailwater section of the Missouri River begins downstream of Holter Lake.

With the exception of a short meadow stretch centered on the mouth of Beaver Creek that runs perhaps 500 yards, the banks here are steep and covered in boulders and/or trees. Cliff faces make accessing some sections on foot difficult or impossible. In some areas these cliffs rise several hundred feet almost straight from the river, making for grandiose scenery.

The river here is generally fast and deep. In most areas wading more than 20 feet from the banks is impossible, and in a few areas the river is five or six feet deep (or more) right up to the rocks. Most wade-fishing pressure is concentrated on the few shallower riffles, especially two areas within the first mile downstream from Hauser Dam, one on each side of the river, and a larger one centered on the mouth of Beaver Creek. 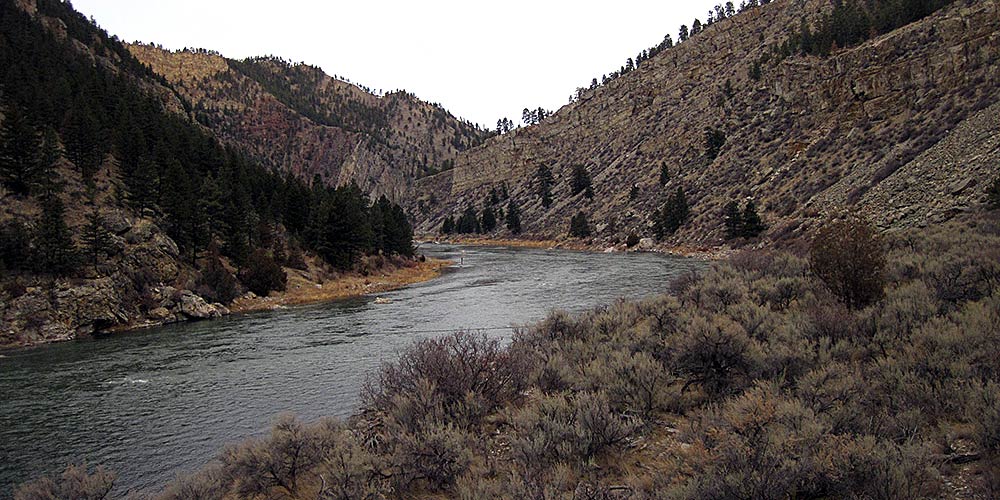 View looking downstream from just downstream from Hauser Dam. The eastside trail is faintly visible at right. Look for the faint line just above the tallest bush. Note the steep banks downriver.

For the last mile or so upstream from Holter Lake, the river slows, widens, and shallows. In this section windblown waves from the lake can be a problem, especially when flows from the dam are low.

There’s good and bad news about wading access. The good news is that almost all of this stretch of the Missouri is public on both banks. The bad news is that actual access points to utilize this public land are limited. Trails follow both sides of the river beginning at Hauser Dam. The dam can be accessed via dirt road. The westside trail runs about a mile before petering along a steep bank, but it is necessary to negotiate a cliff band about 500 yards below the dam.

The eastside trail runs 2+ miles to Beaver Creek, but it’s mostly on a steep and boulder-strewn bank that might be hard for many anglers to scramble down. There’s a Forest Service Access at the mouth of Beaver Creek that offers much easier wading, but it’s crowded because of this fact and requires a long and winding dirt road drive from Helena that takes close to an hour. The trail peters out before a cliff band perhaps 500 yards downstream from Beaver Creek, mostly because the bank gets steeper and steeper below the creek and so offers poor wade fishing. 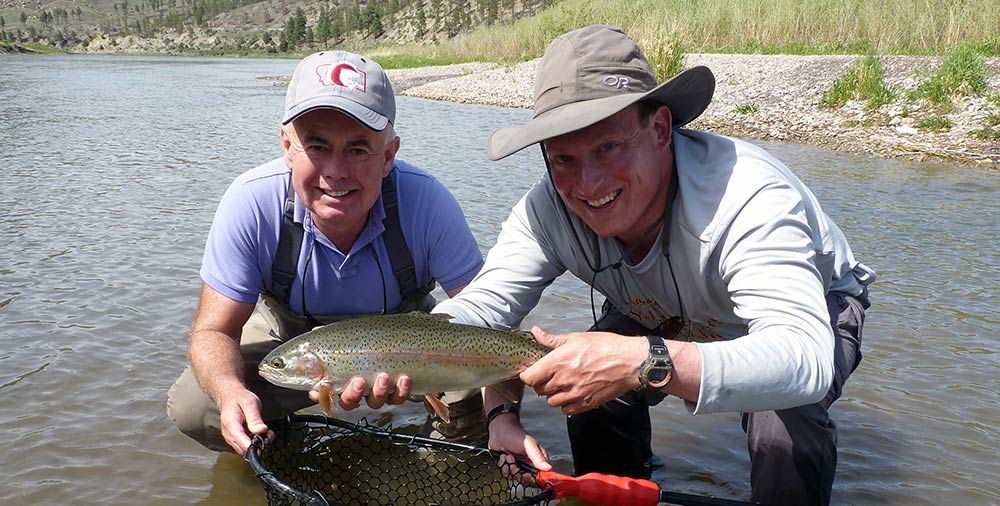 While hand-carried kayaks and canoes can launch at the dam, this does nothing from a fishing perspective since the river current is much too fast to paddle back to the dam at day’s end. The carry-down access is thus only used by people on long boat trips (a friend of mine did the whole Missouri River to St. Louis in 2019, for example). It’s also possible to launch a canoe or belly boat at Beaver Creek, but this is only useful for accessing the opposite river bank, again since it’s impossible to paddle or row upstream.

All fishing boat access is via power boats that launch from Gates of the Mountains Marina on Upper Holter Lake. Boats with prop motors can only safely travel as high as Beaver Creek. Upstream, boulders and tricky currents make shearing off the prop a danger except at high water for those who are EXTREMELY familiar with the water. All guides here except those who focus on walleye and perch in the lake and only trout fish incidentally use boats with jet motors.

Because Holter Lake can get very rough, large, powerful bass boat-style jet boats with a modified vee-hull are encouraged, rather than low-freeboard “trout boats,” drift boat-style “power drifters,” or the flat-bottom jet boats popular on many Midwestern and Eastern rivers. Even 18-foot V-hull boats should not make the trip when winds are forecast to exceed 20mph from the northwest. Several guide boats have flipped after going out when they shouldn’t have, and at least one fishing client died when his guide capsized (no, this was not one our guides!).

While any jet-powered boat large enough to handle the lake crossing works to access this water, boats lacking heavy-duty oarlocks will only work as fishing craft when they’re anchored or beached. To fish on the drift as all guides do most of the time, drift boat-style oarlocks and anchor systems are required. These are expensive modifications.

Land of the Giants is a super-fertile fishery with a cornucopia of aquatic insects, crustaceans, baitfish, and in season fish eggs for the trout to feed on. For this reason, most fishing here is subsurface.

The largest numbers of trout come using nymph tactics. Nymphs work well all season long, with both indicator-nymphing and Euro-style techniques sometimes producing well. Even beginners can do well on nymphs here. 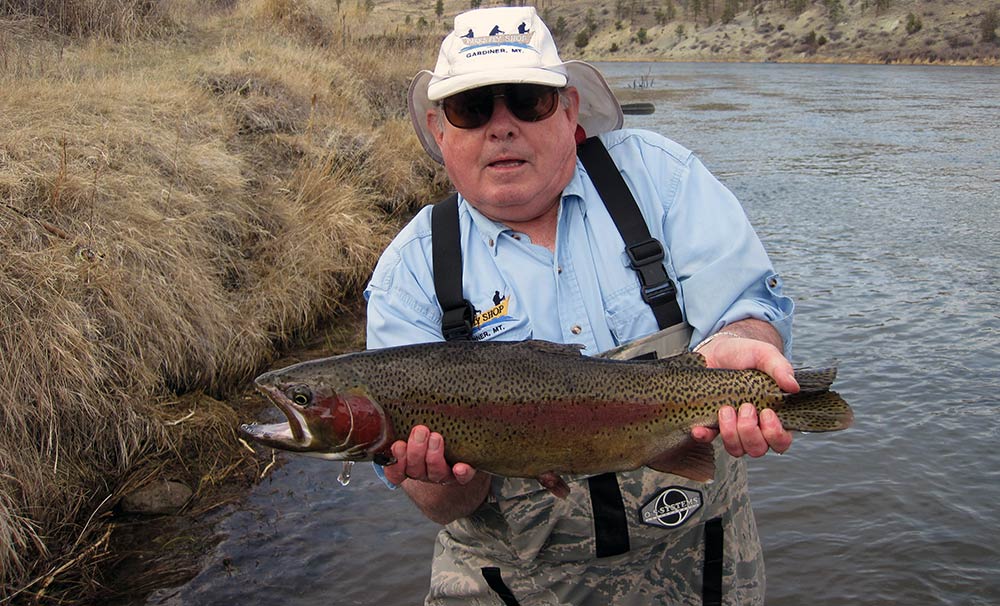 This large rainbow ate an egg pattern in early April.

During the winter and on through early May, midge pupae and assorted pink flies are critical, and the pink stuff is usually best. These pink flies can be tied with the proportions of scuds and sowbugs, mayflies, or even midges. The trout key on the color pink for two reasons. First, pink screams “EGGS,” and trout, kokanee, sucker, and whitefish eggs are important food sources through much of the year. Second, freshwater shrimp (scuds) and sowbugs often turn pink when they die. These are protein-rich and abundant food sources on this water, as well.

The rainbow trout spawn from late winter on through May here, with the heaviest spawning activity from mid-April through mid-May. Angler traffic can be overwhelming at this time, especially in terms of wading anglers. Often wading anglers will jam the prime gravel-bottomed spawning areas, fishing withing feet of one another in their efforts to pound spawning areas. While the rainbows here are a mix of wild and stocked trout rather than all-wild as in most of our operations area, this is still pretty shady. We suggest sticking to the deeper boulder-bottomed water when you’re on foot. Not only is it less-crowded than the spawning areas, the fish are usually as large, almost as numerous, and are in better condition.

Crowds decline and food sources change through late May. Mayfly nymphs and natural-colored scuds take over as the bread & butter flies, but midges, caddis pupae, and San Juan Worms also work well at times. These flies remain the top choices all the way until late October most years, sometimes joined by egg patterns again in late September during the kokanee spawn. Eggs and pink stuff start working again in November, after the smaller population of brown trout have spawned and the earliest-spawning rainbows start getting frisky again.

Brown trout make up only 5-10% of the catch at “Land of the Giants,” but almost all of them are fat, healthy, and beautiful.

For experienced anglers, streamer fishing can be a productive technique and is one that produces the very largest trout and the most brown trout. Streamer fishing is best in late spring and early summer and again in late fall. While standard patterns like Woolly Buggers and various sculpins can work, the brown trout in particular actually love yellow perch imitations. Clouser-style perch patterns are thus the usual ticket for those hunting a big brown or two.

Dry fly fishing is limited to the summer months and is centered on Pale Morning Dun mayfly hatches in late June and July, caddis hatches in July, and Callibaetis mayfly and midge hatches on Upper Holter Lake itself. The dry fly fishing in inconsistent, but spectacular when it occurs. In a strange twist, the fishing is actually less crowded here during the prime early summer dry fly time than it is either early and late in the year, which is completely backwards from most areas in Montana. 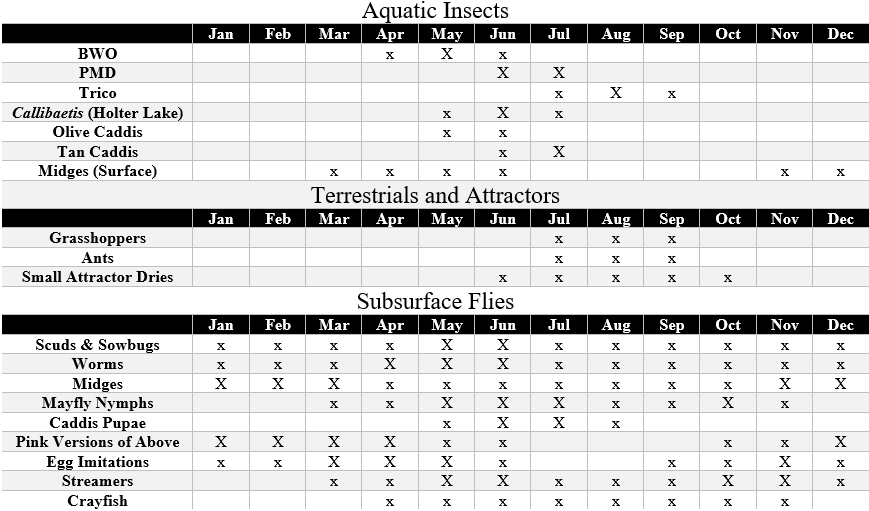