Montana possesses thousands of small streams that offer uncrowded and productive fishing. Most don’t hold large trout, but some do. These creeks, whether they’re the rare public meadow streams or the abundant fast-flowing mountain streams, receive little attention from out-of-state anglers and very little pressure from guides, which makes them attractive destinations for those who don’t want to deal with the crowds now common on major rivers, and even some minor ones.

Because they’re uncrowded and productive, Yellowstone Country Fly Fishing actually loves guiding on Montana small streams, even though accessing them commercially can be tough.

Brook trout are a common target on Montana small streams. They are small but pretty.

For classification purposes, mountain streams are those that flow down quickly from the high country over beds of large cobble and boulders, with many small rapids and plunges. Since they descend out of the mountains quickly and run cold, the elevation of these streams seldom factors into how they fish. All are best in mid-late summer and taper off quickly in early fall. Most hold smaller trout that aren’t very spooky, though some receive runs of fish from the larger rivers into which they feed. These runs might be spawners that mostly aren’t present during the peak fishing season, but sometimes big fish will move into small water or stay in small water after the spawn simply to beat the summer heat, since most mountain creeks run colder than the larger rivers they feed. 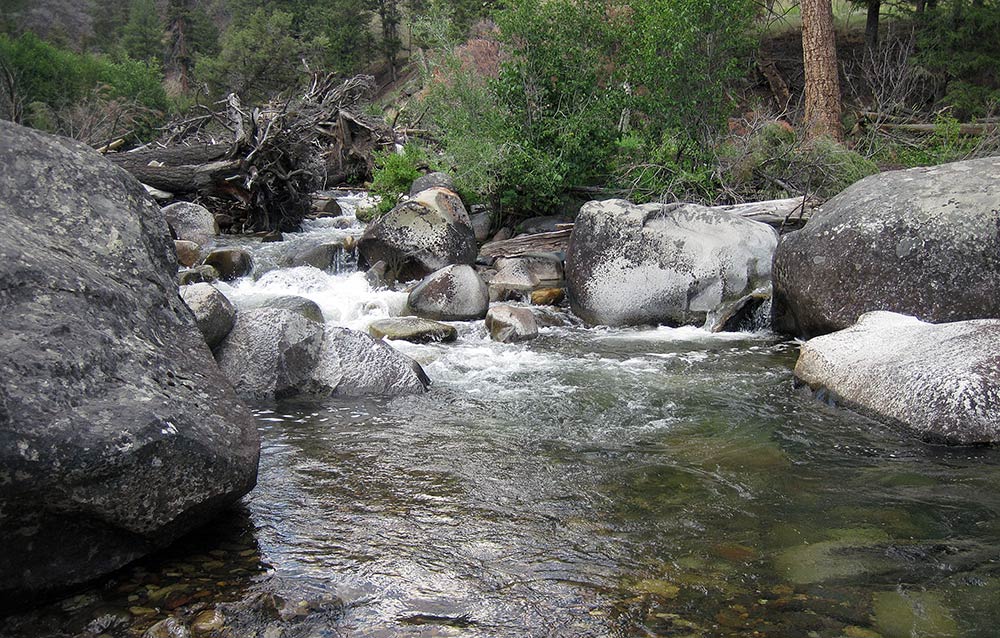 Good structure should be pretty clear on this mountain creek. I think I caught five trout in the area in the picture.

Mountain creeks are by far the most common public small streams in Montana. Virtually every river from the mighty Yellowstone on down to the small Boulder has fishable mountain stream tributaries. These creeks often offer abundant public access, since most flow through National Forest lands rather than private lands. Most mountain creeks also offer some access outside National Forests, whether at county road bridges or on state lands. Because of their abundant access and good fishing, mountain streams receive probably 95% of all small stream fishing pressure in Montana.

They don’t receive much guiding pressure, though. National Forest commercial use permits are no longer issued to new operations, and even the few guide services who have them are often uninterested in using their limited number of service days fishing Montana small streams when these access days are usually burned to use FS  boat ramps on larger rivers.

While Yellowstone Country Fly Fishing does not have our own Forest Service permit, we do have access to a few service days a year through an arrangement with a local fly shop. We’d love to use some of these days on fishing Montana small streams that feed the Yellowstone rather than the big river itself. That said, we still do most of our guiding on mountain creeks accessible from bridges and state land.

This brown trout is a large specimen for most mountain creeks.

While a couple of mountain streams are located below dams which prompt tailwater-style fishing (dense hatches, clear water, and spooky fish), this is very unusual. In most cases, the hard parts of fishing mountain creeks are fighting through the brush, climbing up and down steep banks, wading fast and turbulent water with sudden changes of depth, and making accurate casts with good line management. The fish have to work hard for a living in steep mountain streams and there’s seldom a lot of food, so they’ll usually eat the fly you show them provided it’s in the right ballpark.

Finding the fish in mountain creeks is easy. Find the slow water, preferably slow water that’s near fast water and is a little deeper than average for the stream. Good slow spots can be as large as a shoebox (one fish will live here) on up to a large dining room table (ten fish might live here). A little white foam on the surface, a log hanging overhead, shadows, and other structure just adds to the appeal. Make a few casts to every piece of good structure, breaking large ones into several chunks if need be. Cover water quick and don’t bother changing flies unless the fish just aren’t eating what you’re showing them. 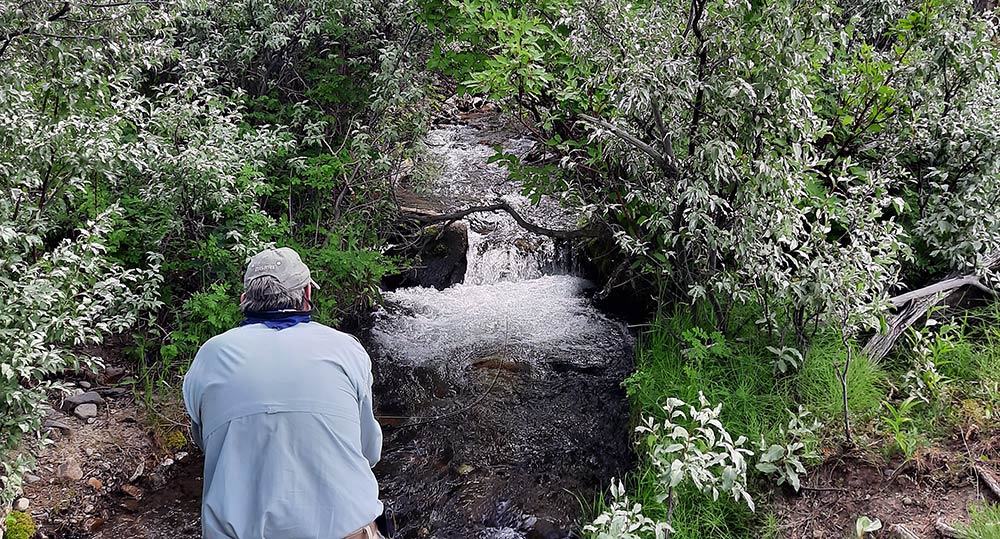 Don’t neglect the smallest mountain streams. The pictured angler caught a 10″ brook trout to the right of the whitewater in the center of the frame. I’ve seen trout over 16 inches from this tiny creek.

Public meadow streams are much less common in Montana. While most rivers do receive some input from streams with a meadow character, either streams that come together in meadow country or mountain streams that cease their rush when they come out of the high country, this usually occurs on private land.

The Montana Stream Access Law means that there’s no such thing as private water as long as it’s naturally-flowing, but you have to get on this water from a public access such as a county road bridge or fishing access site and then stay below the high water mark when you cross into a ranch or other private property. This is much easier said than done in low country where it might be several miles between public bridges and the high water line might be two feet up an undercut bank above a hole that’s eight feet deep around the first bend upstream of a bridge. 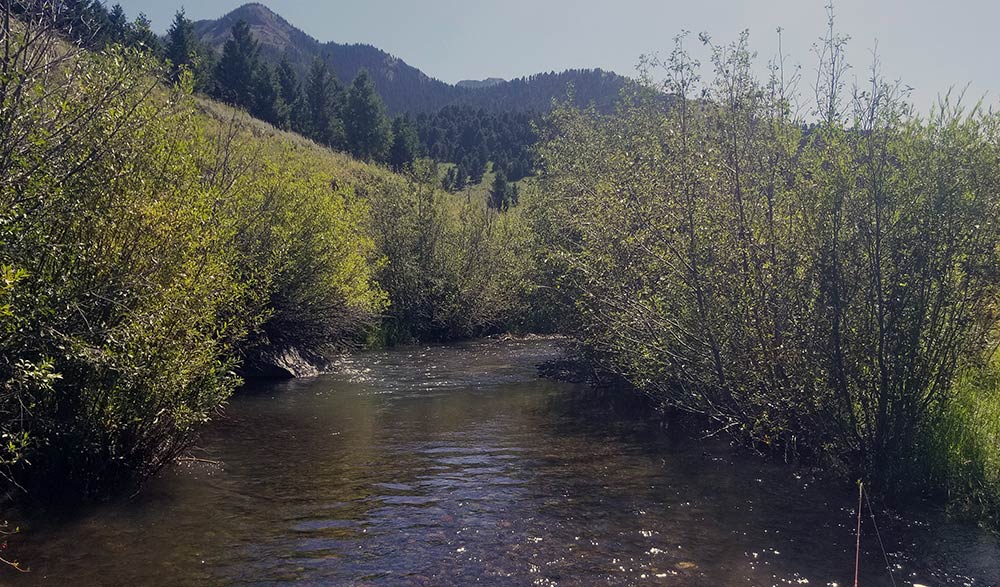 Only 500 yards of this high-elevation meadow stream is on public land, which is typical for meadow streams in the state.

Meadow streams are just that: streams that flow relatively gently through grassy meadows, whether these meadows are at high elevation or low. Often meadow streams have deep undercut banks, deep pools separated by riffles, and abundant food supplies. Even tiny meadow streams may produce large fish. This is especially true of meadow streams that hold brown trout. Any brown that gets large enough to eat its smaller cousins (as well as mice, large grasshoppers, etc.) can get very large.

Meadow streams can be further divided by elevation. In Yellowstone Country Fly Fishing’s neck of the woods, 6000 feet is a good dividing line. Above this point, the trout are likely to be cutthroats and brook trout (though sometimes they’re browns or rainbows) and fishing will be best in July, August, and early September. Below 6000 feet, the trout are much more likely to be browns, the streams are more likely to get low and warm in late summer, and the best fishing is in late June, July, and perhaps in late September and October.

This cutthroat trout came from a high-elevation meadow stream.

The trout in meadow streams are likely to be larger and spookier in most cases than those in mountain creeks. While hatches are seldom heavy on meadow creeks, you may need to plan to fish dedicated insect imitations (including nymphs) rather than just attractor dry-dropper combinations on meadow streams. In general, small meadow streams will share the hatches that the streams into which they feed enjoy. So it makes sense to look at hatch charts for a meadow creek’s parent river when planning which flies to bring. That said, the fish in most meadow streams are not as spooky as those in larger rivers, so the myriad technical patterns required on some heavily-fished rivers and spring creeks are seldom required. If pale morning duns are hatching, just fish a pale morning dun. No cripple/emerger/stillborn/half-drowned monstrosities required. At least not usually.

Fish meadow streams much more slowly than mountain creeks. Several fly changes per pool are not unreasonable if the fish aren’t eating what you’re showing them. You should also wade softly. Don’t think like a fish. Think like a heron.

I’m not going to give away any secrets here, but it doesn’t hurt to note a few good small streams in the region that are already somewhat widely known. If you’re looking for streams to start with, these are good choices. They’re listed approximately in their distance from Livingston, Montana, Yellowstone Country Fly Fishing’s home base.

Fly anglers tend to get overly complicated with our tackle. Sometimes we need to. Sometimes we do not. On high-elevation meadow streams and almost all mountain streams, there’s no need for complex tackle. A light rod rigged for dry fly and dry-dropper fishing, basic tools and accessories, and a single fly box are usually sufficient when fishing Montana small streams.

On most mountain streams, a 7’6″ to 8’6″ three-weight to five-weight rod with a floating line and a 7’6″ 3X or 4X leader will serve you well all season. On creeks you’re certain hold only small trout, an even lighter rod may be used. I use a two-weight on the stream where the brook trout pictured at the top of the page was caught, since I’m sure there’s nothing larger in there. 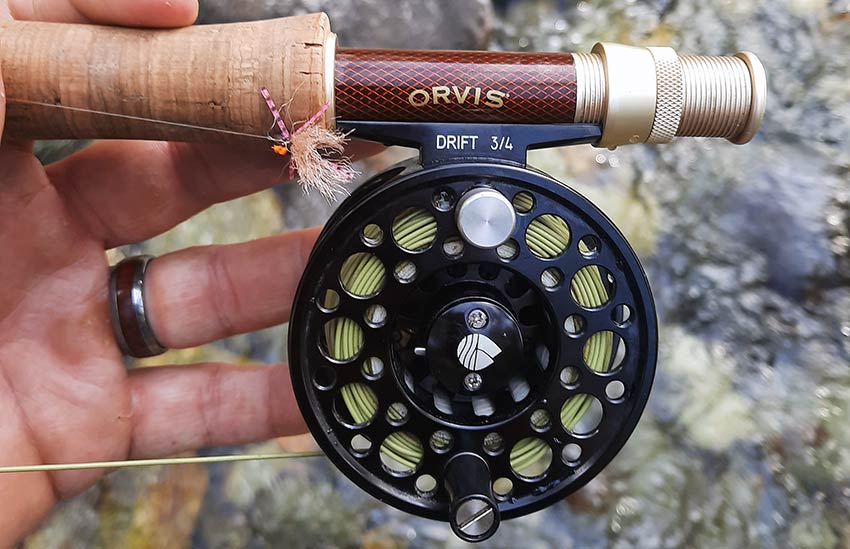 Don’t make your tackle too complex. I fish this three-weight rod/reel combo and something like the pink and brown grasshopper shown here on most small streams.

On meadow streams regardless of elevation, opt for an 8′ to 9′ three to five. The extra reach helps line management on these streams, where casts are usually longer and currents trickier. They also make reaching over bushes or grass easier. I do not suggest rods lighter than three-weight on any meadow stream, because there’s always a chance for a large fish in such creeks. In fact, you might even make the jump to a six-weight rod in the fall, if there’s any chance you’ll be throwing streamers. 9′ 4X or 5X leaders are good places to start on meadow streams, though on the smallest mountain meadow creeks where the trout are small, the shorter and heavier leaders noted above are fine.

You should expect to do a lot of walking, climbing, and scrambling when fishing Montana small streams. Since these creeks almost always fish best in the summer, wearing wet-wading boots makes more sense than wearing full waders. Long pants are a must, though. They protect you from thorns, cactus, and sharp rocks.

Surprising a bear is unlikely on low-elevation streams of any kind, but any creek above about 5000 feet might offer shelter bears. Streams within 75 miles of Yellowstone Park are far more likely to hold grizzlies than elsewhere. For this reason I suggest carrying bear spray on all small streams, even those out in open country.

As noted above, on meadow streams it will be wise to check hatch charts for a given small stream’s parent river. The following chart is intended to provide rough guidelines. That said, these patterns should be all you need on mountain creeks and high-elevation, remote meadow streams such as those found on the Beartooth Plateau.