Intro to Other Montana Waters

We fish plenty of other Montana waters that aren’t part of our core operations. Many of these are a bit too far away for us to focus on. Others provide great fishing, but for carp or other warmwater species that it’s hard to convince our clients to fish for. Others hold too few trout or have seasons so short that they aren’t core fisheries, but they might happen to be good choices for a week or two a year.

The following entries give brief introductions to these other waters we fish. We’ll run a guide trip or two per year on many of them, while others are just places we fish ourselves. The waters are listed in increasing distance from Livingston. 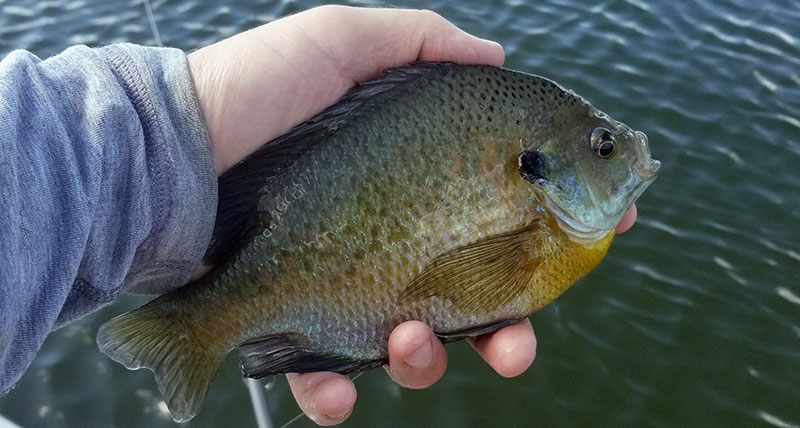 Montana offers some delightful warmwater fishing, but this isn’t what most of our guests are interested in.

The Gallatin heads in the northwest corner of Yellowstone Park, then flows north between the Gallatin and Madison Ranges past Big Sky to Gallatin Gateway. Here it begins curving northwest and then west to join the Madison and Jefferson to form the Missouri. Float fishing is permitted only at the river’s lower end, downstream of the confluence with the East Gallatin River near Trident, Montana. It is legal to use boats as transportation on the entire river, however. You just can’t fish until you pull over.

The Gallatin is a major fishery and good stretches of it aren’t far from us, but it receives heavy pressure from Bozeman and Big Sky. It’s not uncommon for every good wade-fishing access to have an angler in it through much of the season. Our water closer to home or at least farther from Bozeman is usually less crowded.

As is the case with the Shields, once we have an ultralight raft that makes using bad accesses feasible, we expect to begin offering “float and wade” trips on the middle portions of the Gallatin where it is not legal to actually fish from the boat but the boat provides access to areas not pounded by bank anglers. For now we run a few fall float trips on the lower Gallatin. This is “shoot for the moon” streamer fishing for big browns. The overall fish populations on the lower Gallatin are not very high, but the fish are big… We may also wade near Gallatin Gateway in late June and early July.

These three small warmwater ponds near the Interstate in Three Forks are our closest warmwater ponds besides a couple walk-wade ponds inside the Bozeman City Limits. We fish here some ourselves in May and early June, getting our bass, bluegill, and carp fix while trout rivers are mostly muddy. The only reason we would consider a guided trip here is if you have a young eager fly fisher who’s chomping at the bit for some easy fishing for a half-day in May or early June. We’d run such a trip in the drift boat, probably with a trolling motor on the back.

The Jefferson is the westernmost source of the Missouri. It is formed by the confluence of the Big Hole, Ruby, and Beaverhead Rivers near Twin Bridges, Montana. It then flows north, then east to join the other Missouri Forks at Three Forks.

If we were based in Three Forks, we’d run a lot more trips on the Jefferson. While it’s a low-elevation warm river, its upper reaches near Twin Bridges hold good numbers of medium-sized browns and some rainbows. Certainly enough to make it a viable #3 float fishery behind the Big Hole and Beaverhead in late June and early July before it gets too warm. The problem is distance: we’re 110 miles from this water.

The Jefferson River Canyon is much closer, only about 80 miles from here. This is where we concentrate our efforts. The Jefferson Canyon is a pretty, scenic float that doesn’t get much traffic. Fish populations are low, but the fish present are big brown trout. With clients who want to shoot for the moon, this is a good place to float in late June and early July before the river gets too low, warm, and weedy. We’ll throw streamers all day, and if the stars align we’ll boat a handful of truly large browns. Suffice it to say this is not a beginner fishery.

The Missouri between Toston Dam and Canyon Ferry Reservoir is only 80 to 90 miles from us, is an inviting float and wade river with excellent public access, sees minimal angling traffic, holds a lot of big fish, and offers spectacular sight-fishing opportunities both with dry flies and with nymphs and streamers. So why don’t we fish here more? Most of the big fish are carp.

This is probably Montana’s premier carp-fishing destination. The fish average 4 to 10lbs and are usually visible in shallow water, resting or feeding. While bonefish-style streamer patterns are usually the best flies, these fish will also rise to grasshoppers and aquatic insect hatches. For most anglers from July through mid-September, these carp are the stars of the show. When we’re targeting them, I like to float down the middle of the river with everyone standing and watching for pods of fish. When we spot a pod, we pull over downstream, then get out to sneak up on the fish from below. Float-fishing is also possible when the carp are gathered in big eddies eating drowned insects and even cottonwood fluff. 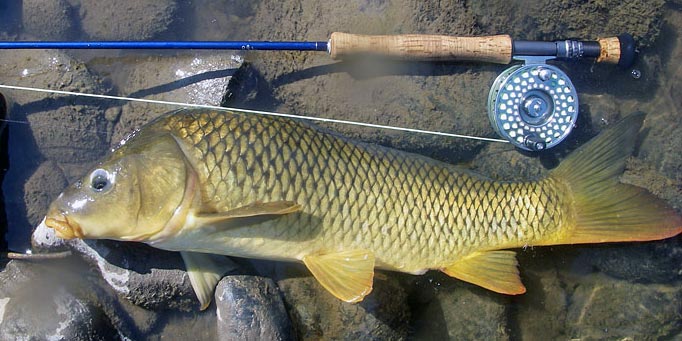 Don’t knock it til you try it! Carp are challenging and fight hard.

Other fish are present here, too. There are quite a few walleye that take streamers well, plus a few enormous pike. Rainbow and brown trout are present in low numbers year-round. They average over 20 inches, but there just aren’t big numbers of them. The numbers increase during spring and fall spawning migrations from Canyon Ferry Reservoir. November is the best month to target the browns as well as a fall-spawning rainbow strain. The sky is the limit with these fish: they average over 20 inches and can reach 30 inches or more. Again, this isn’t a numbers game.

For anglers interested in doing something different, this is a stretch of water we heartily recommend. We offer both float and wade trips here and are even contemplating offering jet boat trips. We’d consider this a major fishery for us if we could just get more folks to do it.

The Musselshell River’s north and south fork come together at Martinsdale, Montana. The river then flows east for hundreds of miles before joining the Missouri at Fort Peck Reservoir. In its upper, trouty reaches, the Mussellshell is a brushy meadow river that’s just a hair too small to float. Access is limited to two fishing access sites and several bridges. Past Harlowtown, the Mussellshell turns into a smallmouth bass river, though low flows prevent it from being a good fishery of any kind until far to the northeast near Fort Peck.

In its upper stretches, the Musselshell is a slow-moving brown trout river that sees some fishing in April before runoff and better fishing from sometime in June through about the middle of July. The fish can get large, but they’re spooky and not numerous. Good hatches can happen on this water, but it’s mostly a nymph and streamer fishery.

The problem with this river is its remoteness. Not only is it 90 minutes from Livingston, it’s also nowhere near any other river fisheries (or anything else, for that matter) in case it’s not producing. It offers similar fishing to some places in Yellowstone Park, but Yellowstone Park has many other walk-wade options in case things go south. Nevertheless, the Musselshell is a back-pocket destination for our Montana Walk & Wade trips, or can be combined with one of the nearby reservoirs.

The Smith River begins southwest of White Sulphur Springs and flows generally northward to join the Missouri near Ulm, not far from Great Falls. The Smith is a famous fishery for the 5-day wilderness float from Camp Baker to Ulm Bridge, for which prospective floaters must put in permits or spend big bucks with one of the large outfitters that has commercial permits. The upper Smith isn’t as snazzy, but it’s closer to home, offers fair walk-wade fishing, and doesn’t require a multiday $5000 commitment to fish.

In its upper reaches the Smith is a small, brushy stream. A creek, really. It gets larger near Smith River State Park, which is where most wade fishing takes place. Here it begins taking on the limestone canyon character that dominates the wilderness float. The Smith is mostly home to brown trout and has good streamer and stonefly nymph fishing in June after the water begins dropping from runoff. Mayfly and caddis hatches are also possible. Like the Musselshell, this is sort of a back-pocket wade trip destination in early summer.

The Upper Madison sees the most recreational use of any river in Montana. On any given day, probably 100 fishing guides are floating every section of it that’s open, and that doesn’t count the recreational floaters and wading anglers. So why don’t we join the crowd? Because of the crowds, for one, and because of the distance involved, for another. During high summer, we have lots of less-crowded options much closer to home. In June, the Lower Madison is closer.

The closest launch to Livingston for a full-day float on the Upper Madison is 90 miles from here, almost twice as far as the launch we like for the Lower Madison. We also think the water even further away on the Upper Madison is better. This is just too far for us to go. It’s almost as far as Land of the Giants on the Missouri where we run most of our jet boat trips, and the Missouri River fish are bigger, more numerous, easier to catch, and from early June onward the crowds there are lower.

If we can’t float closer to home than the Upper Madison due to summer thunderstorms, we’re more likely to just offer you a reduced-fee jet boat trip on the Missouri, instead.

There’s only perhaps half a mile of free-flowing river between Canyon Ferry Dam and the upper end of Hauser Reservoir on the Missouri River near Helena. While seasonally this water receives great migrations of large trout from Hauser Reservoir, it’s such a small piece of water that it doesn’t make much sense as a fly fishing destination. The large numbers of bait and gear anglers who gather here are another factor.

Like the Upper Madison, this stretch of the Missouri River sees heavy angling use. It’s the most famous stretch of the Missouri from a fly fishing perspective, with numerous outfitters and fly shops based nearby. Also like the Madison, it’s just too far away for us to fish regularly. From Livingston, it’s a 165-mile drive to Craig, the main hub town on this section of the river (three fly shops, one restaurant, no cell service). This is way too far for a day trip.

We run a two-day booking here every couple years, always with repeat clients who want to fish with us as much as they want to fish the Missouri River. We always do these trips in May when there are few options closer to home. This stretch of the MO is best from April through June, though like the Land of Giants section upstream it can fish well any day of the year.