The creeks charge rod fees of $40-140 per day depending on the season, with the lowest rates in the winter and the highest during the summer PMD hatches in July. At certain times of year these creeks offer the most consistent fishing in the area, and the guarantee of limited angling competition coupled with easy access, since only 6-16 anglers are permitted on the creeks each day. Advance reservations are absolutely required. I am writing this sentence in mid-February, 2021. Many prime dates in July 2022 are already booked solid.

Unlike most streams in the area, these are flat, heavily-modified, private creeks with many amenities such as easy access roads, benches, warming huts, and other comforts more common on English chalk streams than trout streams in the American West.

What the creeks do not offer is easy fishing. These are not like some similar manicured streams elsewhere in the United States, with big, dumb fish whose populations are kept artifically high via stocking. The trout that live in the creeks are all wild, often large, and very experienced. Except in the dead of winter, they see many flies each day, and laugh at all but the best presentations. 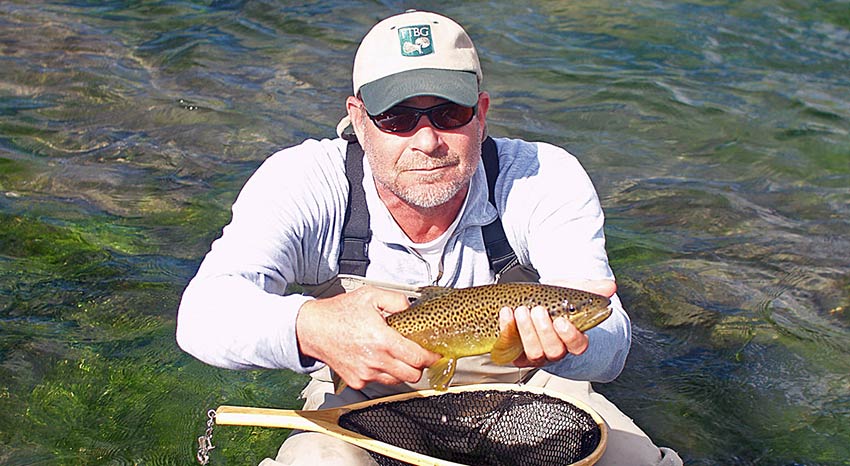 Except during the early spring rainbow run and BWO hatches and perhaps during the early part of the PMD emergence in late June and early July, the creeks are consistently challenging, with spooky, hard-to-fool trout that are more likely to eat tiny crippled or emerging insects than any fly that’s easier to fish and see. Fine tippets, long leaders, and perfect casts are required. On one guided trip a few years back, my client caught seven fish over a ten-hour day of fishing. Not great, but of the other half-dozen anglers on the creek, not one caught a fish.

Suffice it to say that the spring creeks are experts-only water, and are not for number-hunters. Instead, these are good places to visit if you want a challenge, and to spot and stalk almost every fish you target.

We primarily guide on the creeks in March and April, when reservations are easier to get and the creeks are probably the most consistent if not always the best fisheries within a few minutes of Livingston.

Unlike most of our streams, the Paradise Valley spring creeks are flat, with abundant in-stream vegetation. All have some riffles and a handful of runs, usually below road culverts, but long, flat pools and slicks predominate. Depuy has the greatest variety of water, while Nelson’s is quite flat, for the most part. All three streams are crystal clear, with bottoms composed primarily of gravel, though some silt accumulates around the numerous clumps of aquatic vegetation, so it’s important to watch where you step. One notable exception to this pattern is the large pond on Depuy, which offers some stillwater fishing options, including belly-boating.

Typical structure and amenities on a spring creek. This is on Depuy, but similar riffle-pool characters, good trails, and benches are common.

Nelson Spring Creek is on the east bank of the Yellowstone, Armstrong on the west bank. Depuy is primarily composed of Armstrong’s water that has been diverted into an old river channel, making it, according to state law at least, a manmade waterway, though you wouldn’t know that if I didn’t just tell you.

All three creeks are extremely easy to access, with numerous small access roads and wide angler tracks lining the banks. Wading is easy, with firm gravel bottoms. Some sections are almost handicapped-accessible. Due to their flat character, ease of access, amenities that make it easy to take a break, and guaranteed limited competition, these are very popular fisheries for older and less-fit anglers who have enough money to afford the access fees.

None of the creeks are suitable for beginner anglers, and even intermediates will often struggle. At times, even experts get skunked on the creeks. These creeks are flat, clear, enjoy catch and release regulations that let a fish be fooled a few times and still grow large, and have abundant populations of a relatively small number of insects, all of which breeds fish that typically focus on particular stages of specific insects and demand perfect dead drifts. Cautious approaches, long and fine leaders, and a lot of luck are all helpful.

For tackle, think a nine-foot three, four, or five-weight rod for most fishing. For streamer fishing in spring and fall, you might get away with a six-weight. Save for those used with streamers, leaders should begin at nine feet. Fifteen-footers may be required. Again with the exception of streamers, tippets should be light, 5X fluorocarbon at the heaviest. 6X and 7X may also be needed. The spring creeks are the only places in Montana where 7X is ever required. Avoid wearing bright or flashy clothing, wade like a heron rather than a buffalo (and only wade when you must), and use streamside vegetation to mask your approach.

The creeks are open and can fish well all year. In the winter, midge larvae and pupae are the top bets, with some possibility of dry midge fishing or a larger trout that will chase a streamer. Rainbows begin moving into the creeks to spawn in February, and streamers, eggs, and San Juan Worms begin working well at this time. BWO start in March, and some caddis appear in April and early May. Late May and early June see few hatches other than the occasional midge, so small nymphs or streamers are the best bets. The top hatch of the year is the late June-late July/early August PMDs, and the creeks are often fully booked a year in advance during this period. Small terrestrials and attractor dries as well as evening caddis are also good choices at this time. Tricos and the cream summer Baetis or (Western Sulfurs) appear in August and September, while fall Baetis appear from late or early October through December. Browns begin moving in to spawn in October, making streamers and eggs a good bet again through Thanksgiving or even into December.

Note that patterns of all classes should be more “tech” than we’ve suggested elsewhere on this site. Cripples, emergers, drowned duns, and the like are all far more likely to be effective than high-floating dries. By the same token, nymphs should be tied slender and sparse. Oddball flies that fall into these categories and match the predominant midges, PMD, and BWO are definitely worth trying, as the fish get very suspicious of the same-old, same-old. 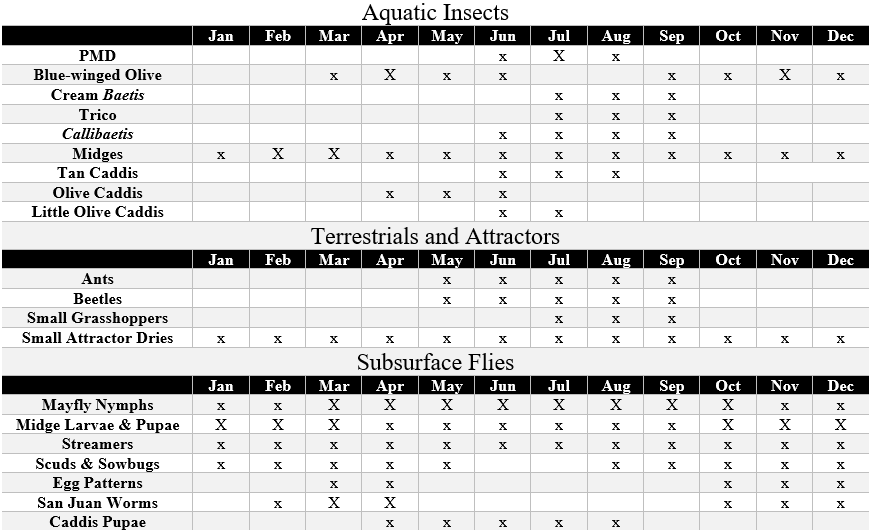