Sometime between the middle of June (following dry winters) and early July (following wet winters), freestone rivers begin dropping out of the spring melt. This happens earlier on the Jefferson, Upper Madison, and Boulder, later on the Yellowstone and the lower end of the Stillwater. Just as the water gets a foot or eighteen inches of visibility, usually while the rivers are still up in the bushes and the current is raging, the fish and trout stream insects on which the fish feed go bananas and probably the most consistent fishing of the year begins.

The Yellowstone, Boulder, and Stillwater are our favorite haunts at this time. The upper Madison is also good. In fact, every river in the region is good at least at the beginning of early summer, though some get too warm by mid-July.

All rivers see their most-varied aquatic insect hatches of the year at this time. Many rivers see brief hatches of the fabled Salmonfly (giant black stonefly) for a week or so, but all possess good populations of smaller stoneflies and several species of caddisflies. Some mayflies also hatch on float rivers, especially in slow areas and on the Missouri. This smorgasboard means that attractor patterns are often better than imitations of one specific insect at this time. With so much to choose from, the fish often don’t get particular for any one thing. 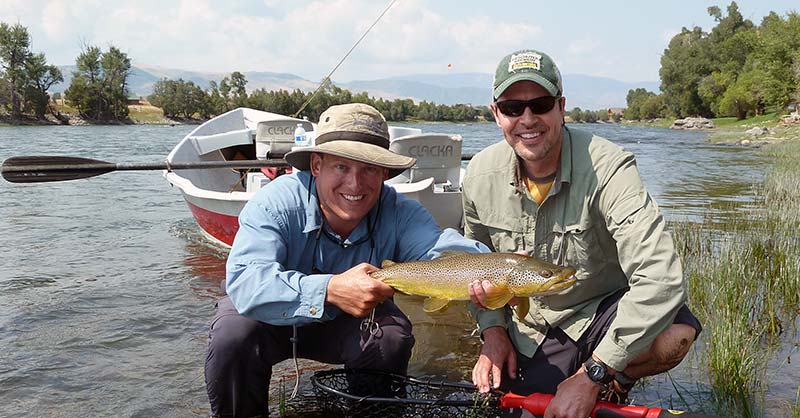 Like the brown trout above, this one ate a dead-drifted streamer. Notice the water up in the grass behind us.

River flows remain high through early summer, often at least grazing the willow bushes and grass throughout this period. Heavy aquatic insect hatches coupled with high flows mean the fish are pushed close to the banks in search of food and to stay out of the current, at least the fish looking to feed on the surface rather than on nymphs and baitfish hiding in the rocks. Therefore, much of the fishing involves making short, accurate casts to shallow water, within a few feet of shore, or right behind midriver rocks that break the surface and therefore cushion the current.

Overall, we have three preferred techniques while guiding at this time. By far our favorite when the fish are cooperative is to fish only dry flies. These might match the various insects that are hatching, large and small, but more often we like to fish various attractors, especially a couple “caddis-like” patterns our outfitter personally developed. Whatever the dry fly, not only is it more fun to see fish rise, but it’s also easier to avoid hanging up in the bushes or the shallow rocks when the fly (or flies) are on the surface and visible.

If the fish aren’t rising well but are doing so occasionally, we will hang a nymph or emerger under a dry. Usually this is a small attractor nymph, a big stonefly, or a caddis pupa.

Our final preferred technique at this time is “drifting and dragging” streamer and nymph combinations. This is indicator nymphing using a streamer pattern with a nymph as a “second chance” fly. Of these three techniques, the last produces the largest fish, while in the right conditions the “dry or die” method produces the most fish. 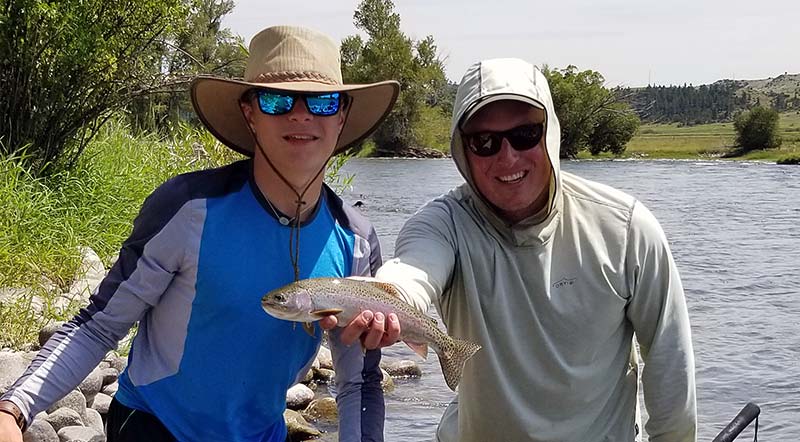 The Stillwater River produces good numbers of rainbow trout on dries in early summer. This one was the young man’s first trout on a dry fly.

This is a wonderful period for experienced anglers who like fast-paced dry fly fishing. The fishing is fast-paced because of the current speed. The slow spots where the trout hold are small, and no matter how hard the guide rows back upstream, most of the time anglers get only one crack at each spot. This is why early summer can be hard for total beginners. Except when floating a few gentle stretches of the Yellowstone within Paradise Valley, the current speed, the small targets, and the many hangups (bushes in the water and rocks) can be frustrating for rookies. That said, rookies who understand things will be fast and furious can still do well, especially when we’re sticking to nymphs. Some of the largest fish that we saw in 2020 were caught by beginner or novice clients in early summer.

Because of the high water that makes wading difficult and also pushes the fish to the same places we’d be standing when wade-fishing, almost all fishing at this time is done from the boat. There are a few areas we might pull into and drop anchor to hit a little harder, and many more we might back into for a few casts, but otherwise almost all fishing in early summer is done while the boat is moving. 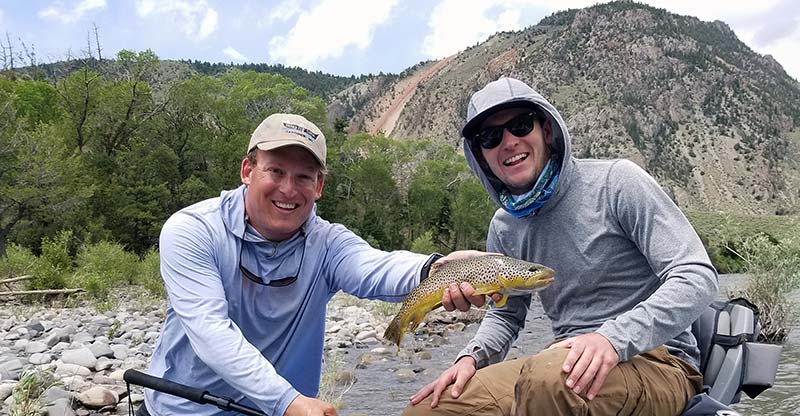 Salmonfly hatches are one of the marquee events of early summer. This brown trout ate a dry Salmonfly.