Most outfitters run float trips and walk trips. Float trips might include a little wade fishing, but boat-fishing is the focus. We like to do things differently at Yellowstone Country Fly Fishing. New for 2023, we’re combining the two and offering Montana float & wade fishing trips.

On these trips we use drift boats, whitewater rafts, and especially our new ultralight, ultraportable rafts to access rivers and streams in Montana that road-bound wade-anglers can’t reach. Fishing from a moving boat is illegal on a few rivers. Other streams are just too small to fish effectively from a boat. Finally, on large rivers where fishing from the moving boat is the standard tactic, sometimes fishing in a nonstandard way can be more productive. Depending on the body of water and the season, we may do some fishing from the boat, or it might just be our taxi. 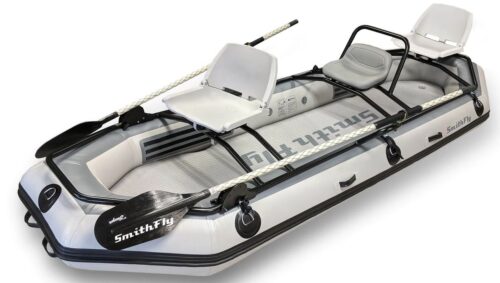 We use ultralight rafts to access small, hard-to-reach rivers and streams where drift boats and full-size rafts can’t go. This Smithfly is Walter’s model.

Float and wade trips are good choices for beginners who want more hands-on instruction than is possible on floats but don’t want to hike in Yellowstone Park. They’re excellent choices for experienced anglers who want to fish big rivers more slowly and methodically than on an average float trip. They’re also perfect for visitors who have done normal float trips on big-name float rivers and want to fish these rivers in a different way. Finally, they’re great for anyone who wants to shed crowds and get on small rivers with poor wade access, rivers that either see no float-fishing pressure at all or none during low water periods.

We run float & wade trips on the Stillwater, Boulder, Gallatin, Yellowstone, Madison, and Missouri Rivers, in about that order of importance. Options may also be available on smaller rivers and even large creeks that we won’t name for the world to read on the Internet.

Please note that on float-wade trips clients must be able to walk river banks and over/around rocks that might be rough or slippery and wade water that might be fast, with poor traction. During low water periods we might need clients to help us drag or carry our rafts over shallow areas or other obstructions, or to launch and take out the boat in areas with rough or nonexistent boat ramps. As such these trips are not suitable for children (great for adventurous teens, though) or anglers with limited mobility. Wading gear without studded soles is required.

Float & wade trips are always available as full-days between early April and early May and between mid-July and late October. They’re also available when water levels permit between early May and mid-July. Shoulder-season 3/4-day trips are available from late February through early May and from October 1 through Thanksgiving, weather and ice status permitting. Access sites are too far apart to run these trips as half-days at any point during the season – we’d spend all our time rowing from spot to spot instead of fishing. 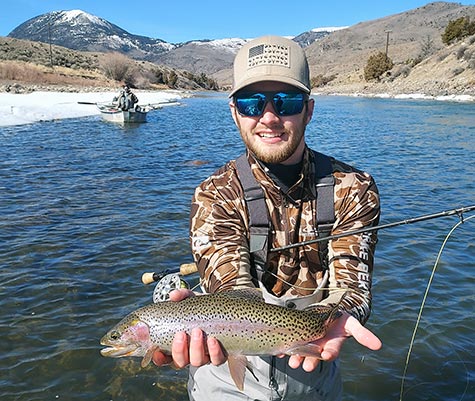 Late Winter and Early Spring Float-Wades (Feb–May): Once the ice breaks up enough to allow floating sometime in late February or early March, float-wades are fantastic options for experienced anglers looking to target large rainbow trout with nymphs and streamers. The fish are gathered in a few deep holes at this time, so it makes far more sense to row from spot to spot, hopping out to pound these good spots, rather than just floating along fishing almost everything. We mostly target the Yellowstone River prior to mid-April, after which the Stillwater, Boulder, and Gallatin also join the party. Float-wades are almost certainly our best public water trip option overall in late March and early April, and this period is one of the key reasons we’ve started offering these trips as a regular part of our program rather than on an ad-hoc basis.

Late Spring Float-Wades: Once the spring melt hits sometime in the first half of May and water levels shoot up, float-wade options dramatically decline. The Madison River as well as a few “No-Tellum” Creeks and small rivers may be flowing low enough for these trips to work, but this availability is sporadic. We suggest regular float trips at this time instead, though we may hop out to wade-fish to a greater or lesser degree, conditions permitting. 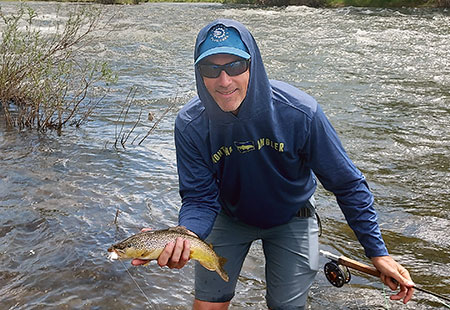 Early Summer Float-Wades: Opportunities for Montana float & wade fishing trips begin increasing again in late June or early July as the water drops. The water is still raging, so we’ll often fish out of the boat more than on most float-wades at this time, but pull over to fish the largest and best pools on foot. The Boulder River is a prime destination at this time, but small segments of the Yellowstone and some “No-Tellum” waters are also good. By mid-July, lots more good options start cropping up, especially as small rivers like the Boulder and the upper Stillwater begin getting too low to fish effectively from a moving boat, but fish well while wading. The Gallatin (where fishing from a boat is illegal) also gets low enough to wade at this time and is a popular destination for clients staying in Bozeman or Big Sky. 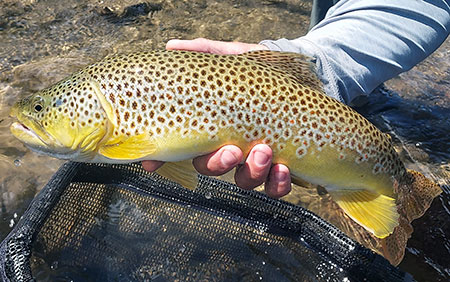 Late Summer Float-Wades: August is probably peak season for float-wade trips. Even big rivers like the Yellowstone are now low enough to wade-fish, while the entire Boulder and large portions of the Stillwater are too low to float-fish effectively but fish great on foot. This makes float-wade trips a great way of dodging crowds and finding less-pressured fish during this period when rivers are busy and the fish have gotten pretty wise to which flies are fake and which flies are real, without the long hikes required to do so on normal walk-wade trips. For anglers looking for something a little different, this period is also when we float-wade the Missouri in search of the area’s largest and most difficult quarry: carp averaging 5–10 pounds. 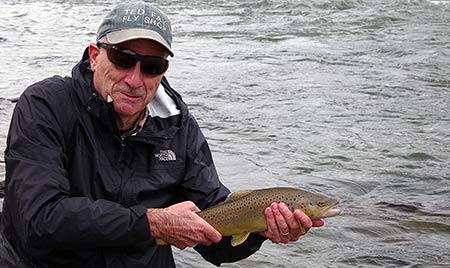 Early Fall Float-Wades: Early fall float-wades are great options on the Yellowstone, Stillwater, and Gallatin. The prime draw at this time is matching hatches. These rivers see good Blue-winged Olive and Tan Drake hatches at this time, and the fish often pod up in good riffles and runs to feed on these insects. While this fishing is most suitable for experienced anglers who like a slower-paced day, it also gives beginners and novices better dry-fly opportunities than standard float trips.

Late Fall Float-Wades: Late-season float wades might include some dry fly fishing, like early fall float-wades, but there’s really one prime draw at this time: fall-run brown trout. Float-wades at this time are great options for experienced anglers who like to swing streamers or nymph-fish good runs in search of the largest brown trout of the year. This is fishing for anglers who want to swing for the fences, or maybe strike out. Favorite destinations at this time are the lower Stillwater and Yellowstone, but trips on the Gallatin, Madison, and even the upper Missouri also make sense. Bring your “big gun” fly rod and your favorite streamers and let’s roll the dice…