Introduction to the Boulder

With increasing pressure on the Yellowstone, its tributaries are becoming better and better options. A Boulder River fishing trip is a great choice if you don’t like crowds. We primarily run float fishing trips on the Boulder, but it is also available for walk-wade trips.

The Boulder River is a small, steep, turbulent, and – yes – bouldery tributary to the Yellowstone. It begins north of Yellowstone National Park and flows predominately north, descending precipitously over innumerable rapids and one significant waterfall as it goes. It runs about 60 miles from its source to join the Yellowstone near Big Timber, about 35 miles east of Livingston.

The upper 40 miles of the river’s course flows through a patchwork of public and private land, with the Custer-Gallatin National Forest interrupted here and there by inholdings, while the lower 20 miles flows primarily through private land, with public access limited to a couple fishing access sites, a city park in Big Timber, and a few bridges. 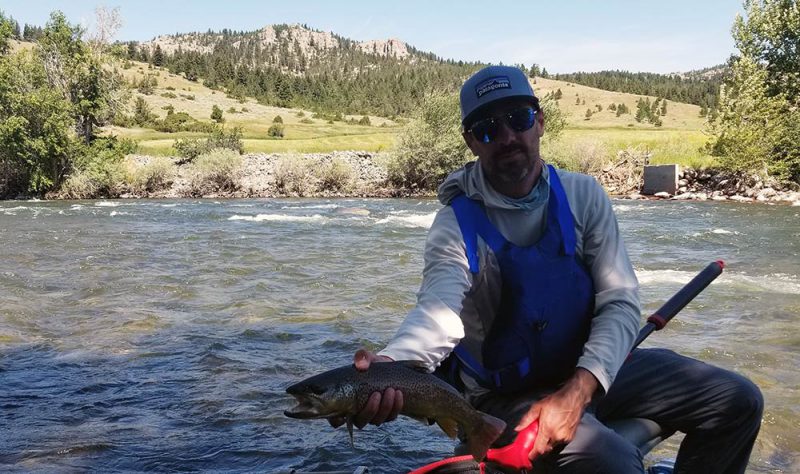 Prime levels on the Boulder are around 1200cfs, which is what things were running when this brown trout ate a TJ Hooker nymph/streamer.

This is a small river and to float on a Boulder River fishing trip, a raft is absolutely required. Even so, the Boulder’s float season is very short. It’s typically floatable for a couple weeks as the water rises in April and early May, for a day or two at a time anytime there’s a cold spell in May and June, and then for about three weeks to a month as the water drops in late June and July. We love guiding the Boulder during this short float window and wish more of our clients were interested in a Boulder River fishing trip.

The short season is the secret to the Boulder’s quality as a fishery. By no means undiscovered, pressure is often relatively heavy on this river during its short fishable window, but the fish are left alone the rest of the time and so seldom get spooky. This, combined with the fast, broken water, means that the Boulder’s solid rainbow and brown trout love eating big dry flies and will eat dropper nymphs if they aren’t looking up. Most of the trout here run 8 to 16 inches, but some browns get big.

This river is ideally suited to our preferences towards fishing dry flies and fast-action fishing. When we’re fishing from the raft, you’ll get one cast per spot here, and if you miss it, it’s on to the next spot. Especially when the water is high, we often pull over to wade fish good areas, not least to get a breather from the breakneck pace of floating this river.

Don’t expect to be alone on the Boulder. Lots of other guides and outfitters like to run a Boulder River fishing trip when possible during the river’s short fishable window, too. That said, since every rock might hold a fish and the guys in the next raft probably flub as many casts as you will, there are usually plenty of eager fish to go around.

To view our Boulder River fishing guide, click the button below.

The Boulder is a small, steep, fast river almost throughout its fishable length. The only exception is a short meadow/valley stretch that begins below Natural Bridge Falls and ends immediately downstream of the East Boulder Road Bridge. With the exception of the road bridge, this slower, gentler stretch is very private. It’s a shame, too, because this stretch would be a great place to wade with a Boulder River fishing guide.

Natural Bridge Falls divides the upper and lower Boulder. This is a spectacular waterfall which as the name suggests is a natural bridge when the river is low. The river disappears underground before shooting out of a cliff face and into a deep pool. Upstream of this point, there are fair numbers of cutthroat trout and abundant National Forest accesses, including campgrounds that invite staying awhile. Recreational traffic is higher on the upper Boulder than the lower because of the access, but it pales in comparison to Yellowstone Park.

While kayakers like to play above the falls (well above the falls, dropping it is not survivable), the upper Boulder is basically a wade fishery because of the river’s tiny size and steep course that includes a lot of class-III and class-IV whitewater. Guided Boulder River fishing trips are very limited above Natural Bridge since except for bridge accesses a National Forest commercial permit is required. As far as I know only one outfitter has this permit.

When the Boulder is either extremely high or getting a bit low, we often pull over to wade-fish good riffles. Photo taken approximately July 20 when flows were around 1000cfs.

Downstream, there are two fishing access sites, several bridges, one city park, and lots of large and very private ranches. Oprah Winfrey has property on this river, and she probably isn’t even the richest landowner. Such folks aren’t likely to let you on their property to fish when you knock on the door.

For this reason, it’s a good idea to plan to float on a lower Boulder River fishing trip. Float traffic compared to mighty rivers like the Yellowstone and Madison is minimal, but even four or five boats on a stretch constitutes a crowd given the river’s small size, which is one reason I prefer to either start and finish early here (to get in front of everyone) or float fast and far to get way in front of boats launching at Boulder Forks and way behind those launching at 8-Mile Bridge (as you may have figured, these are the main launch points on the Boulder).

Except for the developed Boulder Forks access and the takeout at the Big Timber park, all boat accesses on the Boulder are ad hoc, basically holes in the bushes next to a bridge or an eddy where it’s possible to shove a raft down the hill or drag one out. This makes the Boulder unsuited to clients (or anyone, really) who can’t help physically manhandle the raft in and out of the water. The banks are also steep and bouldery, so wade-fishing is out for older or handicapped folks. Suffice it to say that a Boulder River fishing trip isn’t for everybody.

Flows are key to determine if and how to fish the Boulder:

The Boulder is too steep, fast, shady, and shallow to fish well in the winter or during the first breaths of spring. You might catch a few fish in the lowest reaches in late March, but the fishing really turns on here sometime in mid-April when the first extended warm snap melts out the low elevation snow and allows the water to warm. The upper river is honestly too cold most springs, period, though you can catch a fish or two in late April.

Fishing can be excellent in late April on the lower river, both wading and – if the water breaks the magic 500cfs barrier – floating. Caddis and BWO hatches are possible at this time, but nymphs and streamers are usually better pre-runoff. So long as the river stays clear, the fishing generally gets better and better the higher the water gets.

Early May is a key time on the Boulder River. Because of its steep north-facing drainage without any major sources of muddy water, the Boulder remains fishable for at least a week after the Yellowstone blows out with the spring melt. Caddis hatches can be strong, but the nymph and streamer fishing remains the star of the show, and traffic is low since few anglers realize how late the Boulder stays fishable into May.

The one issue with floating in April and may is the potential for downed trees over the river. Any tree that falls across the river from late summer to May will remain where it falls. These tress can and do block the entire floatable channel. These can be very hazardous to floaters. Check with the fly shop in Big Timber or the private Spring Creek Campground and Trout Farm (see the links below) before floating in April-May to learn about any trees that might eat your boat. 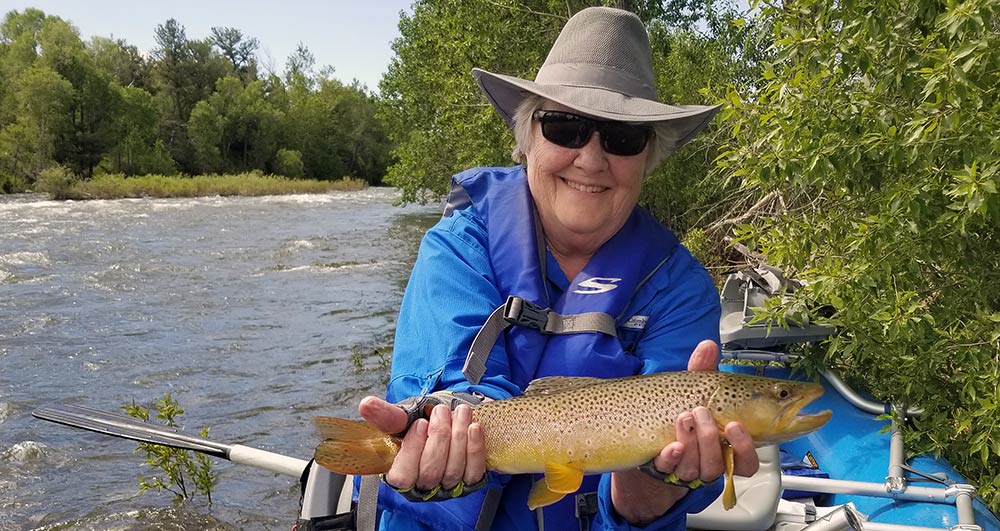 The Boulder River is productive even when the water is very high. We are basically anchored inside the treeline.

Even after flows top 2500cfs and the Boulder gets as muddy as it’ll ever get, keep an eye on the stream gauge (see the links section below). Just a couple days of cooler weather will drop the Boulder into floatable shape for a day or two at a time throughout the May-June runoff cycle. After the initial surge of dirty water runs through with the first or second pulse of runoff, the Boulder is never too dirty to fish, it might just be too high. During periods of low-enough water, nymph and streamer fishing can be absolutely outstanding on the lower Boulder. Unlike the Yellowstone, where one short “runoff break” is a gift from the trout gods during each runoff cycle, the Boulder routinely sees three or four such periods from mid-May when it blows out until late June, when it starts dropping out of runoff.

The Boulder usually starts dropping out of runoff in the last week of June. In dry years this might occur as early as June 10 (very bad for late summer fishing and fish survival), while in wet years it might not happen until July 4. The next three weeks offer the best fishing on the Boulder overall. While nymph rigs might be necessary first thing in the morning, a large dry fly with some sort of fast-sinking nymph is usually the ticket. a Chubby Chernobyl or Synth Double Wing is our favorite top fly, while a Golden Stonefly or Yellow Sally Stonefly nymph, tung-head caddis pupa, or something like a beadhead Prince usually works well underneath. The TJ Hooker is a great choice as well. This is sort of a Girdle Bug and Woolly Bugger combo that looks sort of like a stonefly and sort of like a small sculpin. 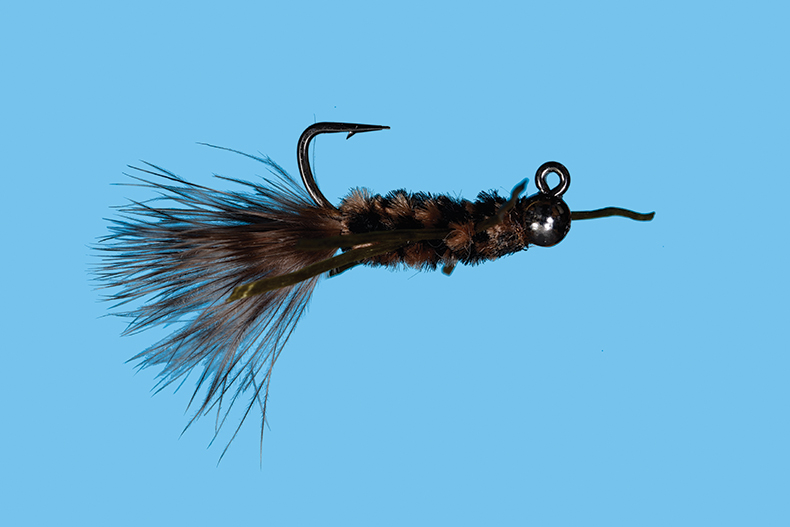 The TJ Hooker stonefly nymph and sculpin combo. Let me put it this way, the first we heard of this pattern was pulling one out of a bush on the Boulder. Since then it’s become a favorite on all rough waters. Photo courtesy Solitude Fly Company, the distributors.

Hatches are possible once the water starts dropping. While Yellow Sallies are abundant and there are some Golden Stoneflies, the Salmonfly hatch is pretty minimal on the Boulder. Good midday PMD hatches can bring up a lot of fish, while caddis tend to pop from mid-afternoon onward. High-floating dry flies are important on the Boulder because of the rough water. We’ll usually match an attractor dry that’s in the right ballpark with a high-floating hatch-matching dry. When PMD are hatching a Royal Wulff Cripple in the right size combined with a PMD like Galloup’s Missing Link is a good combo, for example. There’s usually no need to fiddle with emergers, cripples, and whatnot.

Hatches can continue once the water drops in late July, but terrestrials generally take over. Usually I stick to some sort of hopper, though ants can be good too. Pair your hopper with a flashy and fast-sinking mayfly nymph from late July through September. Note that the lower Boulder has a lot of irrigation drawdowns, so it can get too warm to fish ethically on August afternoons. Stick to mornings or go fish the upper river or one of the Boulder’s forks, which are fun small streams.

In October, browns run up from the Yellowstone and the resident browns get frisky, too. Stonefly nymph and egg combos as well as streamers will pull these fish, while BWO hatches are also possible.