Introduction to the Stillwater River

The Stillwater River is the largest tributary of the Yellowstone River upstream from the Bighorn in eastern Montana. In many respects it’s a larger cousin of the Boulder, its neighbor to the west.

Unlike the Boulder, some portion of the Stillwater remains high enough to float most seasons through the entire core season, and sometimes even through late fall. Use this Stillwater River Fishing Guide to plan your trip, or give us a call to set up a guided trip. We run float trips and occasional walk-float combo trips on the Stillwater. 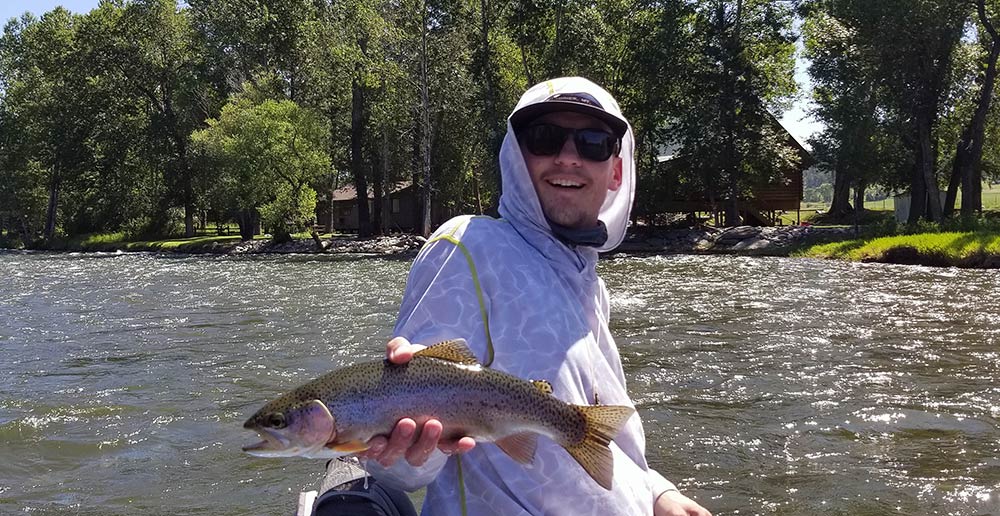 The Stillwater sees far less angling pressure than rivers closer to Livingston or Bozeman, and the fishing benefits from it. In terms of sheer numbers of fish available to the average floating angler, the Stillwater might be the best river in our operations area right now, and it’s a favorite of many visiting anglers “in the know.” We hope to run a larger number of Stillwater River fishing trips in the future.

For what it’s worth, the Stillwater is our owner Walter Wiese’s favorite river at the moment.

For Stillwater River fishing tips, click the button below.

The Stillwater’s name might well have been a joke by whoever named it. In many respects it’s like a large version of the Boulder. While the Boulder is probably a little steeper and faster overall, the Stillwater still moves very quickly even in its mellower lower sections, while in the upper reaches it is class-III to class-V whitewater. Its bed and banks are generally composed of cobble and boulders and the footing is often poor. This is never a stream where wading or floating anglers are given any letup unless you just make yourself stop and look at the scenery. We suggest doing so. This is a pretty river in a pretty valley.

Public access to the Stillwater is abundant. Upstream of the town of Nye, hit the trail for remote small stream (and small trout) fishing. Between Nye and Absarokee, the river flows mostly through private land but there are three good fish and game accesses. Between Absarokee and the Yellowstone – a long but doable full-day float – there are five more, a couple of which offer long stretches of wading access. 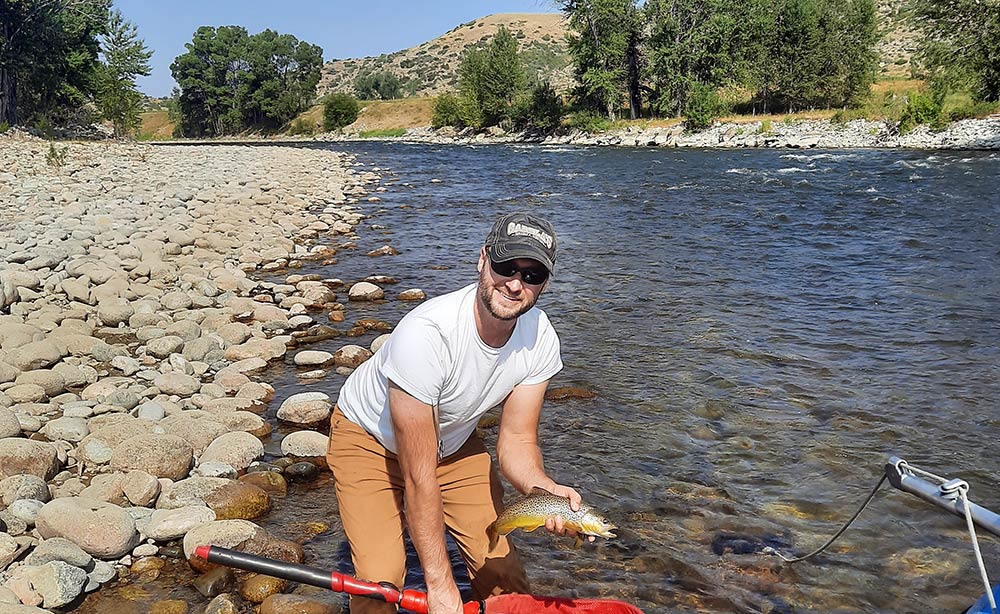 When flows on the Stillwater drop under about 800cfs, crowds drop dramatically. We saw one other boat the day this photo was taken.

Wading the Stillwater downstream from Nye is slightly easier than wading most of the Boulder, simply because the Stillwater has slightly smaller rocks and more gravel bar and riffle combinations. The areas near accesses see a lot of wading traffic from local anglers (the lower Stillwater is only 40 miles from Billings, Montana’s largest city), but walking will put you on fish. The Stillwater is also a very good river for “run and gunning” from the raft. Pull over on every suitable gravel bar, then get out and wade fish. There aren’t many local guides on the Stillwater, but many of them focus on fishing the river this way.

Floating the Stillwater is not for the faint-hearted, especially when flows get low. The upper reaches near Nye have some big rapids, and there’s a hair-raising drop over a rock shelf with nasty “deadhead” log snags below on the lower river. More nerve-wracking perhaps are the numerous shallow spots that require some combination of “threading the needle” through the deepest slot little wider than the raft and getting out to drag/carry the raft where it’s simply too shallow to float.

Recreational floaters and commercial whitewater rafters (not fishing guides) are common on the lower river. Non-angling raft traffic drops off sharply when flows are under about 1200cfs and are virtually absent below 800.

The Stillwater probably offers the most consistent dry-dropper fishing in YCFF’s entire area of operations. Pretty much any time you fish here from late June through the middle of September when flows are under 2000cfs, you can expect the fish to eat large attractor dry flies or hoppers with some form of nymph dropper if there isn’t a hatch and smaller attractor dries with the appropriate silhouette if there is a hatch. You need only get away from the popular wade accesses between Absarokee and the Yellowstone where wade-angling is heaviest.

Some fishing is possible before the spring melt, especially in late April and early May. This is mostly nymphing, though there may be some BWO hatches as well. So long as the Rosebud isn’t muddy, the lower reaches near the Yellowstone will be best at this time.

Spring runoff hits sometime in mid-May. Like the Boulder, the Stillwater can run clear for a few days at a time even during the melt. This is most likely upstream from the Rosebud but is possible during cold spells even below. Medium-sized Woolly Buggers, stonefly nymphs, and big attractor nymphs are top bets at this time. 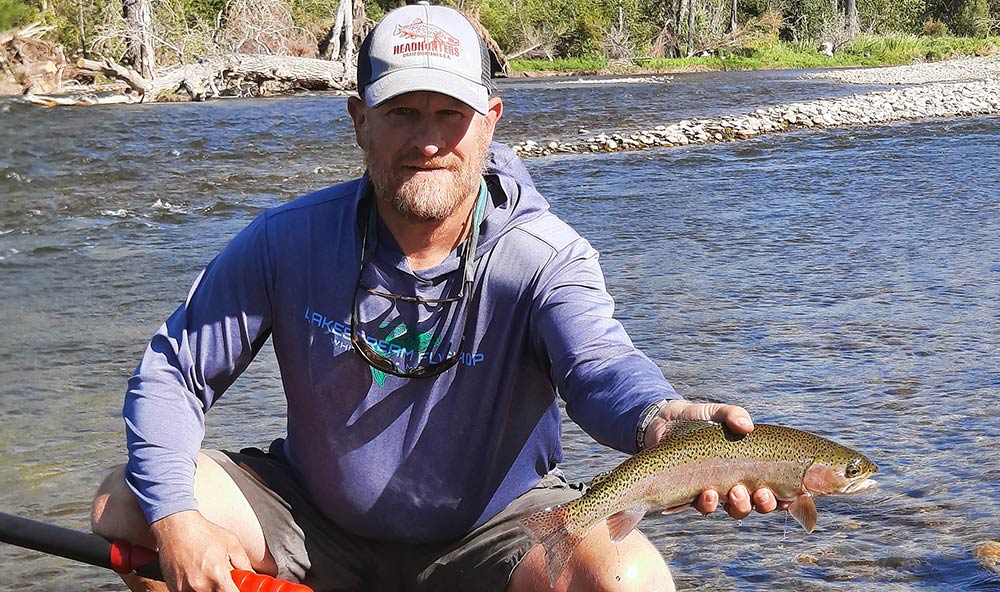 The bottom mile of the Stillwater River is a bit slower than most of it, creating ideal riffle structure where the trout are eager to eat grasshoppers.

When flows reach 2000cfs, good dry fly fishing begins. The Stillwater is home to very large numbers of golden stoneflies and nocturnal stoneflies, so #8-12 Chubby Chernobyls are excellent dries, as is the locally-popular attractor dry the Jack Cabe. Some caddis, Yellow Sally, and PMD hatches round out the dry fly offerings, but attractor dries in the right size usually work fine. Under your Chubby or similar dry, fish compact but heavy Yellow Sally or caddis pupa patterns, usually on longer droppers to fish the deep slots.

Hoppers and mayflies increase through August, while caddis and stoneflies decrease, so big mid-August it makes sense to replace your Chubby with a dedicated foam hopper pattern such as a Bob Hopper in #10-12. Trail this with either a heavy, bright mayfly nymph like a jig-style Little or Big Spanker or perhaps a medium-sized attractor mayfly dry like a #14 Hazy Cripple. These same flies continue to work well into autumn, while more-dedicated and often smaller mayfly-type dries may be necessary during hatches.

Note that the elusive Nocturnal (Midnight) Stone holds on a long time here. We’ve seen them flying around as late as September 20, and these aren’t stoneflies known for flying or for being visible at all during daytime. Odds are that the trout eat your hopper pattern as a stonefly much of the time.

Streamers get important again in September, and both streamers and typical fall brown trout fare like Girdle Bugs and egg patterns work well in October and early November. 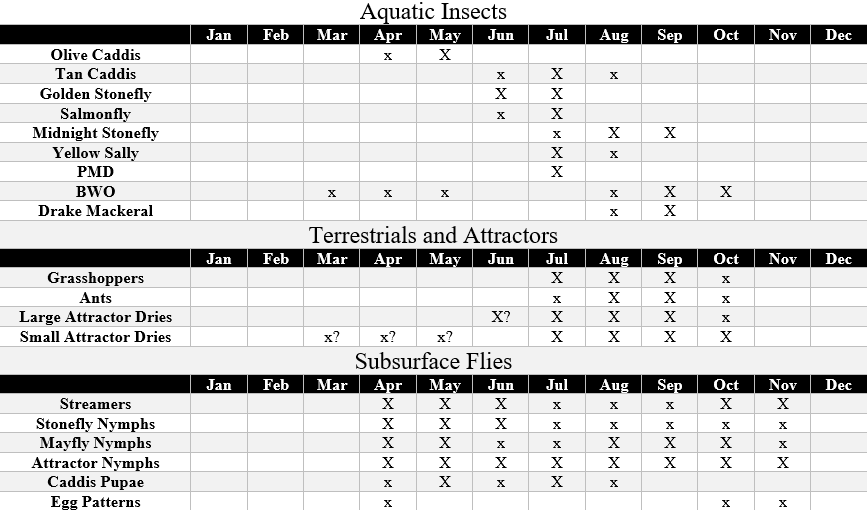