As many readers will know, Hebgen Dam on the Madison River malfunctioned the morning of November 30. In this post, we give a summary of the problem, immediate efforts to rescue stranded fish, and impacts. We then make some guesses on the effects of Hebgen Dam malfunction on the 2022 Montana fly fishing season.

Summary of the Hebgen Dam Malfunction

Around midnight on Tuesday the 30th, a dam component broke and caused the dam’s outlet gate to immediately shut. This Hebgen Dam malfunction reduced the river’s flow from just under 700cfs to under 200cfs (half the record low flow) in about 30 seconds. Imagine the latch that keeps an extendable ladder extended suddenly breaking and the ladder collapsing abruptly to its folded length. 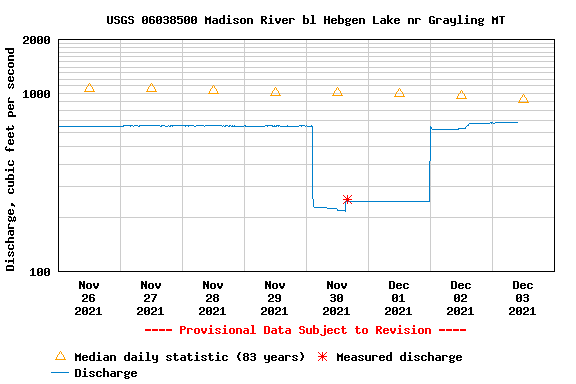 This abrupt cut in flows did not leave time for fish (trout and forage both) in side channels and other shallow areas to flee to deeper areas and left brown trout redds full of fertilized eggs from the recent spawn high and dry. Here are more details on the problem. Repairs on the dam were completed just after midnight on Thursday December 2, meaning fish in side channels were trapped and eggs left exposed for about 48 hours. The impacts were highest between Hebgen and Quake Lakes, where the drop in flows was most abrupt and only a couple tiny tributaries enter to keep flows slightly higher. 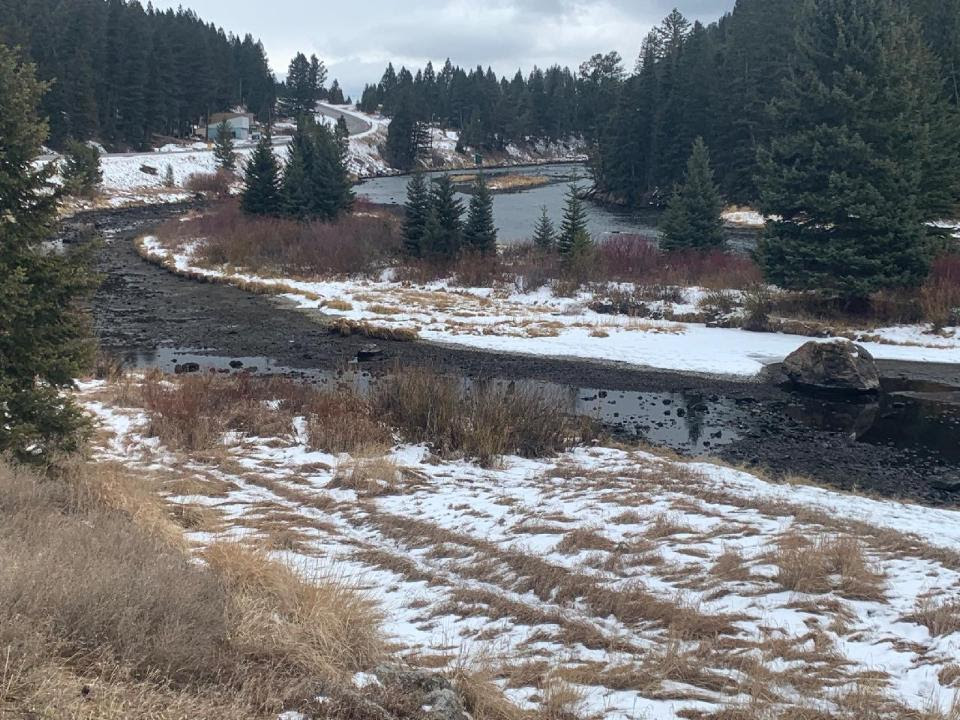 The channel at left is usually a couple feet deep and is full of brown trout redds.

On Wednesday December 1, volunteers coordinated by Montana FWP staff conducted a salvage operation to move fish trapped in deep spots in cut-off side channels to the main channel while avoiding redds that were still damp. Most fish moved were sculpins and some small trout. Most dead fish found were small trout. It seems that most larger trout were already in deeper water (typical for winter water conditions) or were strong enough to wriggle over the shallow gravel while it still had any water at all flowing over it. That said, the largest trout rescued were over 24 inches in length.

Despite the above efforts and the relatively short period before flows returned to normal, a fish kill of unknown proportions is certain. Additionally, a substantial loss of the 2021 brown trout spawn is also certain. The worst fish kill seems likely to have occurred immediately below the dam. The worst egg loss is likely the entire section between Hebgen Dam and natural Quake Lake downstream. Both impacts gradually decrease the further downstream you travel, with the trout kill in particular much lower by Cameron, Montana, about halfway between Quake Lake and Ennis Lake. Impacts on redds are likely present throughout the Madison between Hebgen Dam and Ennis Lake.

Montana FWP instituted an immediate emergency fishing closure on the entire Madison River from Hebgen Dam to Ennis Lake when notified of the crisis. To our surprise, this closure was lifted as of Friday, December 3. We expected it would be continued for quite some time and honestly are a bit horrified that it was lifted.

We encourage all anglers to AVOID this stretch of the Madison through the winter and spring months to allow the fish time to recover and to ensure no angler impacts on remaining brown trout redds and the upcoming rainbow trout spawn. The lower Madison near Bozeman is below Ennis Lake and was unaffected by the dam malfunction. The Yellowstone Park section was likewise unaffected.

Volunteers rescuing trout and sculpins on the Madison River. Photo by Washingtonflyfishing.com message board member (and Bozeman-area local) user “Swimmy.”

Effects of the Hebgen Dam Malfunction on the Madison River

Effects on the Madison River itself remain to be seen but are likely to be substantial and last through the 2022 season and beyond. These impacts will be highest between Hebgen and Quake Lakes and lowest between Varney Bridge and Ennis Lake. The lower Madison River downstream of Ennis Dam (including the Beartrap Canyon) will be unaffected since Ennis Dam had normal water releases during the crisis.

When the Hebgen dam malfunction first occurred, we anticipated widespread and long-term angling closures on the river. At the moment, it does not seem that these will be instituted. We believe some closures SHOULD take place. We will be writing a letter to Montana FWP as a permitted outfitter on the river and thus a stakeholder suggesting as such. We believe:

The above changes would allow populations to return to normal for the future without unduly hurting area anglers and guides. Note that the traditional season opener from Quake Lake to Lyons Bridge was historically the third Saturday in May. This date was only changed about five years ago.

Effects of the Malfunction on Other Waters

We must first note that the “Between the Lakes” and “Fifty Mile Riffle” sections of the Madison River impacted by this disaster are not in our core operations area. In fact we are not authorized to guide between Hebgen Dam and Quake Lake and only run about one or two trips per season between Quake Lake and Ennis Lake. So the direct impacts of the Hebgen Dam malfunction, fish kill, and damage to the brown trout spawn on our operations and most of our Livingston-based clientele will be nonexistent.

Impacts on other waters will not be direct. Even the Missouri River of which the Madison is a source was and will remain unimpacted, since Ennis Lake downstream had normal water releases into the Missouri downstream.

Indirect effects may be present. These are all “possibilities,” rather than certainties: