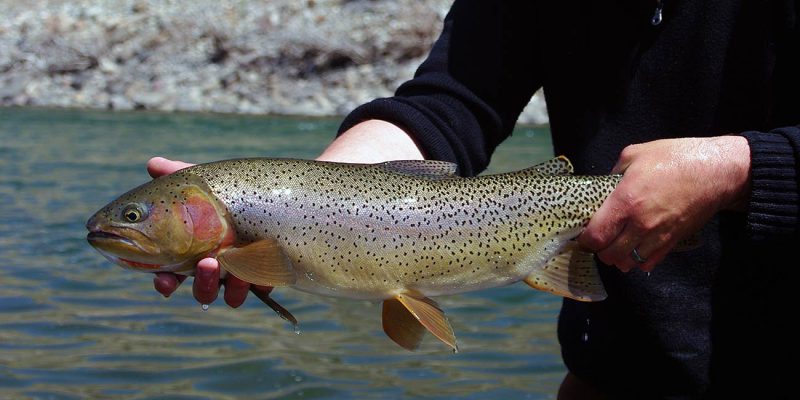 The largest rainbow and rainbow-cutthroat hybrid trout we see on the Yellowstone River are often caught on early spring float (or walk) trips. We got three this size in about two weeks, including two in one day.

Early spring begins when the winter ice recedes enough to make floating safe and lasts until the heavy spring runoff hits freestone rivers like the Yellowstone sometime in early May, or once in a while the last few days of April.

Despite the lack of pressure, this is a great time of year to float area rivers. The trout have the feedbags on to recover from the rigors of winter and the rainbow and cutthroat trout are preparing to spawn in tributary creeks, and are therefore aggressive.

We’ll be honest, we typically only guide a few trips a year during this period, because there simply aren’t enough tourists visiting Montana at this time. That said, it’s not uncommon for the largest fish of the year to come at this time, particularly rainbows. Because of this, we do more “personal” fishing on the Yellowstone River in early spring than during the rest of the year combined. One glorious day in late March Walter caught two fish over 23 inches long in an hour on the Yellowstone, and he never saw another angler or boat that day. Need we say more?

Early spring tactics are primarily subsurface. Our usual technique is to nymph with a big stonefly trailing something smaller, with a streamer rod at the ready as a changeup option.

The fish often gather in big numbers in small areas at this time, whether they’re sitting out the winter cold in pods or preparing for their spawning runs. For this reason, in early spring we often stop the boat and fish small areas hard, either anchored up or by using the boat mostly as transportation, then getting out to fish the likely spots on foot.

Unlike during the summer and early fall periods, we never fish dries in early spring unless we see rising fish. With the water still in the 30s or 40s, the fish simply don’t want to burn the energy to rise unless there are enough bugs to make it worthwhile. That said, the last few days of early spring on the Yellowstone can see some of the best dry fly fishing of the year.

This is the fabled Mother’s Day caddis hatch. This bug comes off in the millions or billions and drives the fish wild, provided the river is clear. This is a tough hatch to plan for, as often the river blows out with runoff right at the beginning of the hatch, but if you can hit it right, this might be one of the best days of fishing of your life.

Note that the Yellowstone does get crowded when the caddis pop, because every other guide in the state knows that this event causes spectacular fishing, too.

Large trout of all species often put on the feedbags right at the beginning of spring runoff. Walter caught this brown on the last day the river was clear enough to fish before blowing out for the spring melt. Notice how brown the water is in the background.

By far our favorite river to guide in early spring is the Yellowstone. It is clear most of the time, though warm weather can muddy it for a day or two as low-elevation snow melts, especially when the warm weather is accompanied by rain.

When the Yellowstone does get some early mud, the lower Madison is a great option. Further afield, the Missouri below Holter Dam is always great in early spring, and sees less traffic now than it does a few weeks later. The Boulder River is too cold through most of early spring, but it gets warm enough and high enough to float in late April and stays clear about a week later than the Yellowstone does, which makes it a great secondary option.

The major downside of early spring is the weather. “Spring” in Montana is not like spring in warmer places. It might be 15 degrees in the morning. It might snow all day. Worse, it might spit a mix of rain and snow. The wind often howls. It might also be 80 degrees and turn the rivers filthy with early snowmelt down from the mountains.

Floating can therefore be rather uncomfortable when the weather is bad, and the fishing can be unproductive when the weather is “good.” The somewhat variable water and weather conditions carry over to the fishing: it’s not consistent. Sometimes it’s great, but it can be tough too, especially if you’re after big numbers of fish rather than larger fish.

During early spring, half-day trips are better choices that full-days most of the time. This is especially true in March. Later in April, and especially in the few days of May before the runoff hits, the water warms and the fish get more aggressive, meaning full days are also a great option. Regardless of trip duration, we won’t meet early. There’s seldom any need to be on the water before 10:00AM.