On the heels of low snowpack in 2020-2021 followed by a record warm, dry summer that came early, we are currently in severe to extreme drought throughout the YCFF operations area. Most areas are in extreme drought, the second-worst category overall. Montana is in worse shape as far as drought than any other regions in the West except for Oregon east of the Cascade Range and southern Nevada. Unfortunately, we had a very dry winter. Thankfully, substantial rain and snowfall occurred through most of April, and the weather has been substantially colder than normal. This has significantly improved our outlooks for the core summer season from our early April outlook, when we basically thought the sky was falling and expected absolutely terrible water conditions this year.

We still don’t expect a high or even normal water year, but instead of the record-low water we were facing a month ago, we now generally anticipate somewhat low flows. We’ll take it, assuming that’s what we get. 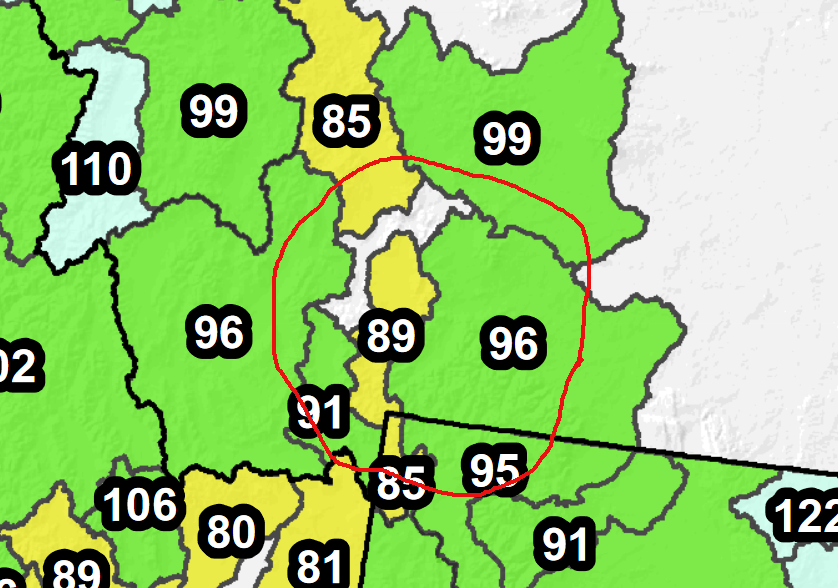 As of right now, snowpack within our operations area is at 85% to 99% of normal. This is a huge increase from the end of March, when things were at 68% to 80% of normal. The most important basins–the Yellowstone River Basin in WY and Yellowstone Park and the Yellowstone River Basin in Montana–are at 95% and 96% of average, respectively. While on paper these numbers suggest near-normal water levels, they don’t take the drought into consideration. A lot of our snow will disappear straight into the ground during the spring melt, rather than actually contributing to streamflow.

We have enjoyed a cold and wet April. Current NOAA outlooks generally predict below-normal temps and above-normal precip through about the middle of May. This is great news. We now anticipate a late start to the spring snowmelt (rivers have only recently risen from winter-low flows, three weeks late). The longer the snow stays in the mountains, the longer water stays in the rivers in mid-late summer.

If the 8-14 and monthly outlooks are correct, we will have a very late start to the spring melt. Very good news for summer weather and water conditions. Worse news is our long-range outlooks for summer. This graphic for the June-August period is not what we want to see. If these forecast hot and dry conditions dominate through summer, it will undo a lot of the good we’ve had this April and have forecast in May.

In a general sense, here’s what we expect for June through mid-September streamflow and fishing conditions. This is based on current conditions and the longer-range outlooks. Think of the following as something like a weather forecast from a week out: it’s too early for specifics, but the general outline is probably accurate. We anticipate low streamflow conditions for the June-September core season. Water temperatures may also be warm, but this depends on summer weather.

Here’s what this means for anticipated water and fishing conditions. In general, the following assumes a somewhat accurate weather outlook for the next couple weeks and summer weather that tracks roughly with the NOAA long-range outlooks.

There have been substantial changes to the following forecasts due to the abundant snow and cold weather we’ve enjoyed in April. In particular, we no longer expect 2:00PM closures in late summer unless we have an extreme heat wave save on rivers that almost always have them, such as the lower Madison River.

Runoff is starting at a normal or late date. Our next update in mid-May will bring the following date ranges into much sharper focus.