As of right now, the numbers don’t look too bad. I’ll let the following map do the talking. Our operations area is outlined in red: 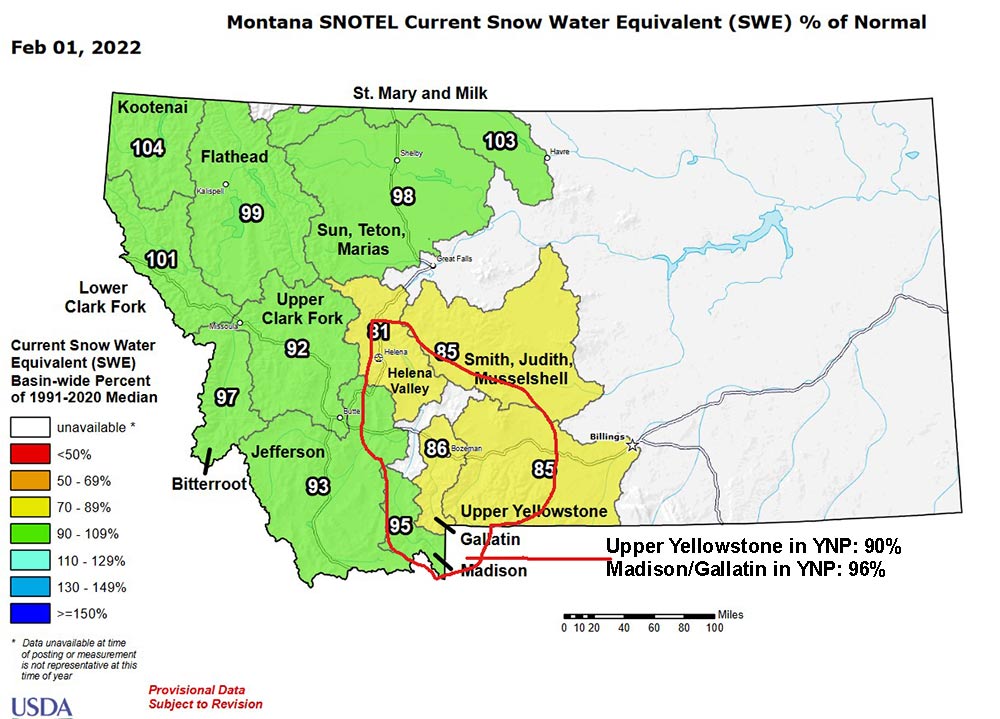 The problem is that these numbers are showing across the board declines over the past month. While the east has been getting pummeled by storm after storm, we have been in a horrific dry spell. The above are percentages of normal for the date, meaning that here in Livingston we’re at 85% of normal accumulated snowpack for this time of year, since we’re in the Upper Yellowstone basin.  In early January, we were 15 points higher. The Madison/Gallatin basin in YNP was more like 30 points higher. The basic problem is that January is historically one of our three snowiest months, along with March and April. For all intents and purposes, it has not snowed at all in the past month.

Long-range outlooks through February 10 or so suggest continued warm and dry conditions. After February 10, a possible shift to cold/wet conditions is possible. We want this shift. In general, we prefer normal to slightly high snowpack to keep our waters running cold through the summer. To have any hope of getting such conditions for summer, we really need to shift during February rather than later, since we have such a debt to make up after last year. All of Montana and western Wyoming is in severe, extreme, or exceptional drought, the three worst categories. Without substantial improvement to snowpack, our drought situation and therefore summer/fall streamflows will not improve.

It is still early enough we can’t make set-in-stone predictions about summer streamflows and fishing conditions. Our first in-depth predictions will come around March 1. Even so, the following conditions seem likely given our drought situation and current snowpack numbers:

We will put up another update in mid-February, hopefully with an improvement in snowpack or at least better prospects for snow to report.