On the heels of low snowpack in 2020-2021 followed by a record warm, dry summer that came early, we are currently in severe to extreme drought throughout the YCFF operations area. Montana is in worse shape as far as drought than any other regions in the West except for Oregon east of the Cascade Range and the state of Nevada. Unfortunately, current snowpack is very low, so these conditions are not likely to improve much. Current snowpack ranges from 74% to 86% of normal for the date in our ops area, with the two most important basins (the Yellowstone River basins in Wyoming/YNP and Montana) at 83% and 81% of normal, respectively. 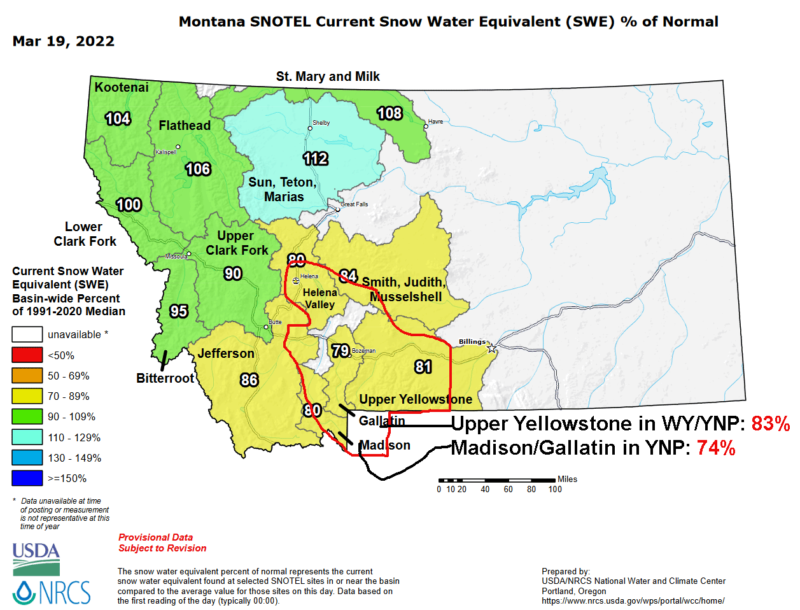 The culprit for the above low snowpack is simple: we had very little fall and early winter snow, lots of snow from about December 10 through New Year, almost none in January and most of February, and a little since. January and February snowfall were record-low in many areas throughout the region. The following graphic is from the Two Ocean Plateau Snotel, a high-elevation snow data sensor at 9240 feet near Yellowstone Park’s southern boundary, in the Wyoming portion of the Upper Yellowstone basin. Notice the flatline. That’s this year’s water. The smooth green line is mean snowpack for the date. The jerky green line is median snowpack for the date.

Unfortunately, the 6–10 and 8–14 day outlooks, the monthly outlook for March, and the 3-month outlook for April through June do not look promising for much improvement in the above numbers. The 8–14 day and three-month outlooks (the latter covers the entire spring runoff season) are provided below.