Posted on May 19th, 2022 in Season Forecasts, Weather & Water Conditions

Here in Yellowstone Country, winter snowpack and how this snowpack melts from late April through June play the most important roles in summer water supply for both fish and agriculture from early June through mid-September. June through mid-September temperatures and rainfall play a secondary role. Only after mid-September does day-to-day weather play the largest role in overall water levels and water quality. Winter and spring weather are thus very helpful in planning summer fishing trips to the region.

On the heels of low snowpack in 2020-2021 followed by a record warm, dry summer that came early, we are currently in severe to extreme drought throughout the YCFF operations area. About half our operations area is in each category, which is an improvement from a month ago when 3/4 of our operations were in extreme drought. The core of winter brought no relief from this drought. As of March 31, snowpack sat at just over 70% of normal in most areas and we anticipated exceptionally low snowpack and thus extreme to record low streamflows. Following from this, we anticipated widespread stream closures and bad fishing conditions in late summer.

Thankfully, we enjoyed the coldest April since 1997. May has been more of a mixed bag, with several-day runs in the 70s followed by several-day runs in the 40s or 50s. The next three days are forecast to be cold and wet, with significant mountain snowfall, but then it’ll rise back into the 60s. The spring runoff has begun on all rivers, having started around May 15th-16th, about a week late. Overall, we saw drastic improvements in our water situation through early spring, with snowpack rising sharply and soil moisture at low elevations improving due to substantial rainfall. This has significantly improved our outlooks for the core summer season from our early April outlook, when we basically thought the sky was falling and expected absolutely terrible water conditions this year. 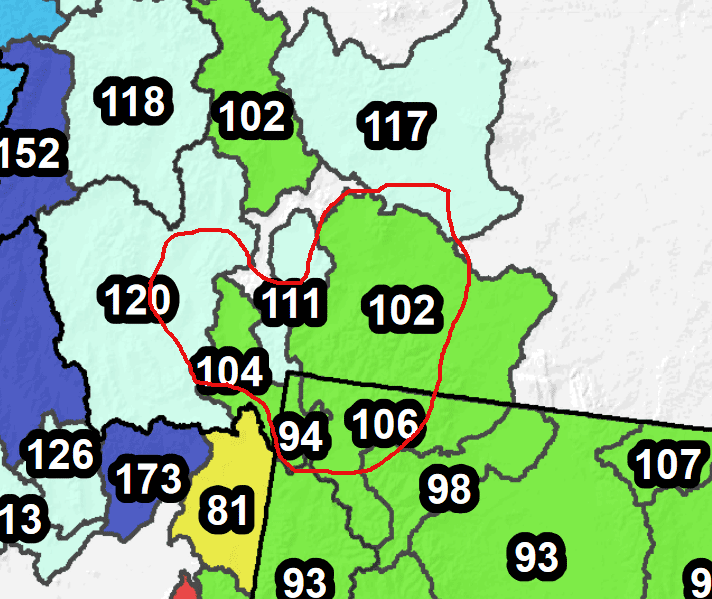 Snowpack as of May 19, with our approximate operations area circled in red.

These near-normal and above-normal numbers are rather misleading because they reflect the cold spring we’ve had rather than actual precipitation. Peak snow depths at most snow sensors (click around at this link) were far below normal. This snow just reached peak depth late and hasn’t melted as quickly as usual. Because of the ongoing drought, much of the snowmelt will just go straight into the ground to replenish soil moisture, rather than making it into streams. As such, we still anticipate below-normal streamflows during the core June–September season. They just won’t be as drastically low as we expected six weeks ago.

Current NOAA outlooks through the remainder of May suggest near-normal temperatures and precipitation, which is fine. We would love to have it remain cold and wet, but normal is far better than the hot and dry we had last year, which led to runoff finishing by early June. There is now no chance of that happening this year.

Long-range outlooks (the monthly outlook for June and the seasonal outlook for June–August) do not look so friendly. We are forecast to see above-normal temperatures and below-normal precip. Boo.

In a general sense, here’s what we expect for June through mid-September streamflow and fishing conditions. This is based on current conditions and the longer-range outlooks. Think of the following as something like a weather forecast from a week out: it’s too early for specifics, but the general outline is probably accurate.

There have been substantial changes to the following forecasts due to the abundant snow and cold weather we’ve enjoyed in April and early May. In particular, we no longer expect 2:00PM closures in late summer unless we have an extreme heat wave save on rivers that almost always have them, such as the lower Madison River.

Since runoff has now begun in earnest, we are growing much more confident about the accuracy of the following date ranges. If you haven’t booked your lodging or guide service, we suggest doing so ASAP since availability of both is now getting sparse.

As of this writing, I still have lots of availability in June, August, and September. July is much tighter. I still have a few open days at the beginning of the month for Salmonfly floats or hike & wade trips and late in the month. I am fully-booked from July 5–22 and July 27–30. Contractor guide availability for the days I’m fully booked will also be rather thin during this period.

The following photo is from a private lake trip to Sitz Ranch on May 17. Fishing was so-so, but all fish were 16–21 inches. Photo courtesy Steve Smith. These guys will start eating dry flies in a few days. 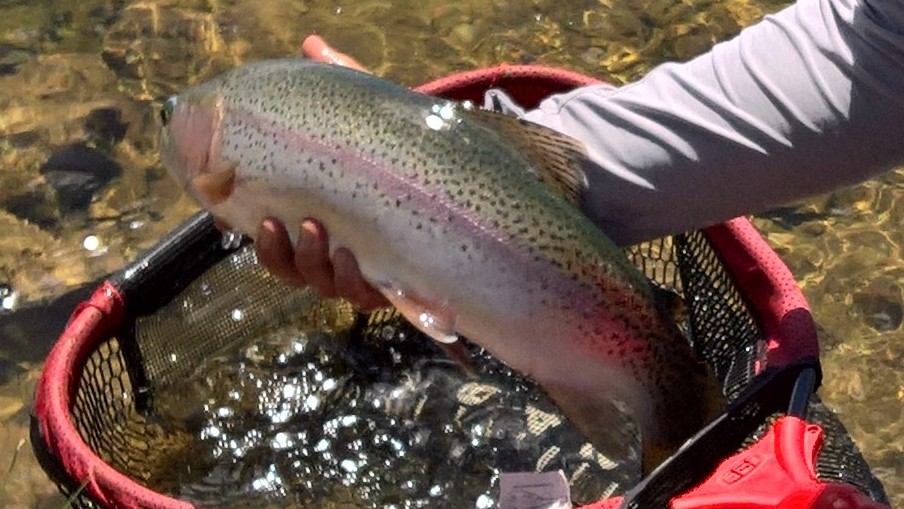