On the heels of low snowpack in 2020-2021 followed by a record warm, dry summer that came early, we are currently in severe to extreme drought throughout the YCFF operations area. Montana is in worse shape as far as drought than any other region in the West except for Oregon east of the Cascade Range. Unfortunately, current snowpack is very low, so these conditions are not likely to improve much. Current snowpack ranges from 77% to 85% of normal for the date in our ops area, with the two most important basins (the Yellowstone River basins in Wyoming and Montana) at 85% and 81% of normal, respectively. 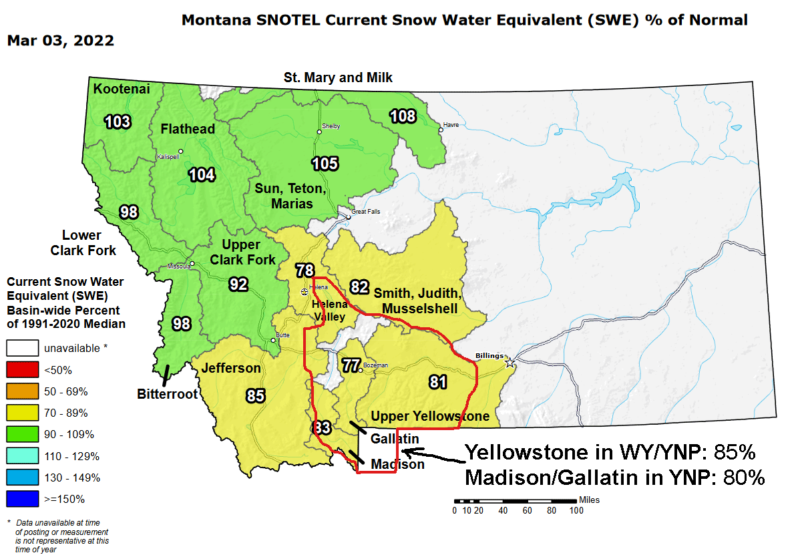 Montana snowpack as of March 3, 2022. Our operations area is circled in red.

The culprit for the above low snowpack is simple: we had very little fall and early winter snow, lots of snow from about December 10 through New Year, and almost none since. January and February snowfall were record-low in many areas throughout the region. The following graphic is from the Two Ocean Plateau Snotel, a high-elevation snow data sensor at 9240 feet near Yellowstone Park’s southern boundary, in the Wyoming portion of the Upper Yellowstone basin. Notice the flatline. That’s this year’s water. The smooth green line is mean snowpack for the date. The jerky green line is median snowpack for the date. 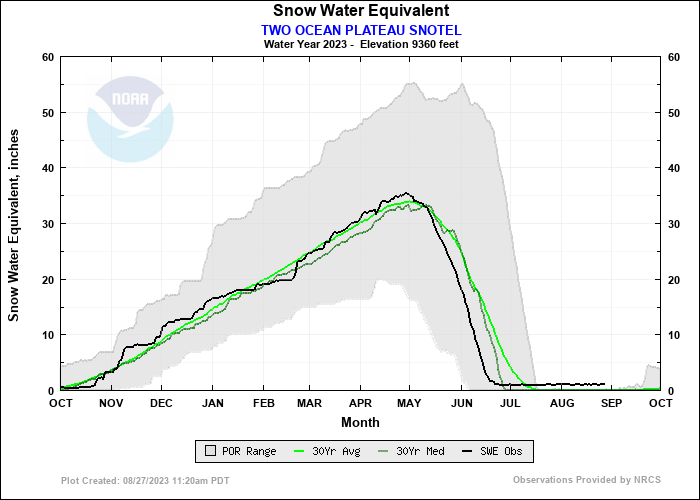 The past week has been awful for snowpack, with temperatures reaching into the 40s even in the mountains and touching the mid-50s at valley level. Low-elevation snow is almost gone. Things do look to improve between now and mid-March, however. Cold, wet weather is in the forecast more or less as far as the eye can see. We hope it materializes. Such outlooks have been present throughout most of the winter but have rarely come to pass. The following graphics show the composite temperature and precip outlooks for the 6–10 day period and through March. This information is at NOAA’s Climate Prediction Center.