May and some portion of June is runoff season in Montana, when the high mountain snow melts at last and turns every river, stream, creek, trickle, and rivulet that isn’t immediately downstream of a large dam into a raging chocolate brown torrent full of sticks, logs, and debris up to and including dead livestock and game animals. Sometimes this period even extends into early July, though with the effects of global warming this happens less and less often.

Needless to say, this is not the time to float freestone rivers, as rivers that aren’t protected by dams are known. It’s not that the fishing is so-so. It’s that the rivers are dangerous to even float, much less fish.

There are a few rivers that remain good at this time within our operations area. The Lower and to a lesser extent the Upper Madison are closest to Livingston. The Missouri River downstream of Holter Dam near Craig and Wolf Creek, Montana is further afield and almost always the best option during this period. In fact, this is usually the best period on the Missouri overall, provided anglers are willing to fish deep with nymphs to rack up the numbers if the trout aren’t rising.The crowds that swarm the “MO” at this time attest to the quality of the fishing. This is also the most consistent period on the Lower Madison, though this is simply not as good a stretch of river as the Missouri below Holter. 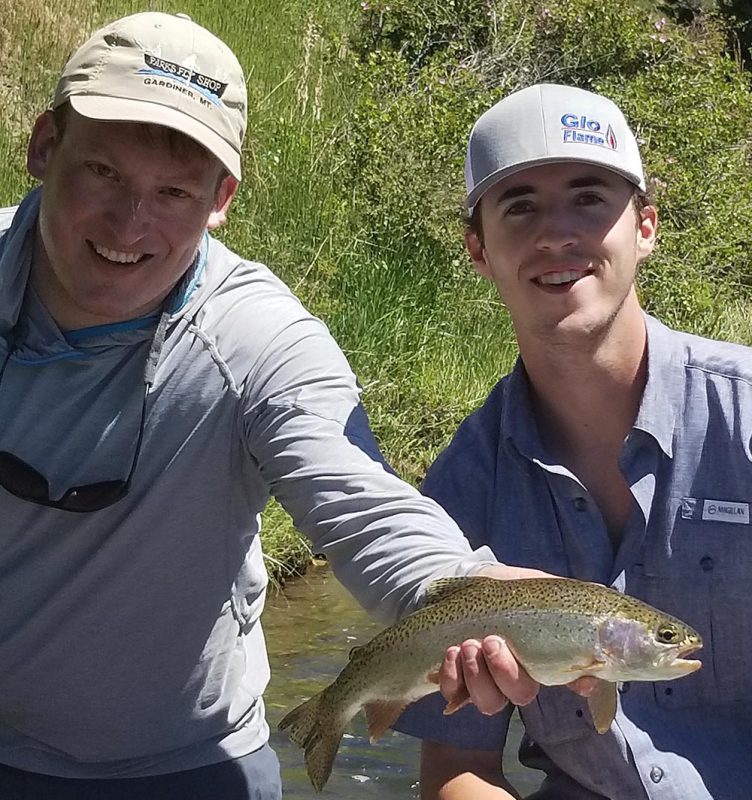 This Lower Madison rainbow trout ate a caddis pupa suspended beneath a dry. This is one of the larger fish you can expect from the Lower Madison using this technique rather than fishing deep with crayfish or imitations of other large food items.

Our primary float trip option in late spring is the Lower Madison River, which is located about 30 minutes from Bozeman, about an hour from Livingston. This puts it in closer range than many other options we fish regularly later in the season, including all of Yellowstone Park, portions of the lower Yellowstone, and the Stillwater.

While we run a few trips in both areas, neither the Upper Madison nor the Missouri below Holter are part of our core operations area. The Upper Madison is close enough to consider for day trips from Livingston. The drive is 1.5 to 2.5 hours. The Missouri below Holter Dam is 160 to 190 miles away, and therefore really too far for a day trip. The portion of the Missouri where we run power boat trips is 30 minutes closer, which makes things much more reasonable.

Crowds on all rivers low and clear enough to float in late spring are generally high. There’s just no getting around it. Lots of people come to Montana expecting everything to be good in May and early June, as it is in many other parts of the country, and they are all clustered onto fewer rivers than usual. The Missouri gets hit hard, in particular.

On the Lower Madison, most large trout get caught on streamers, crayfish imitations, and San Juan Worms. Sometimes the highest numbers of trout also take these flies, but the Lower Maddy is an insect factory by mid-late May and most days see good insect hatches from sometime in mid-late morning through evening.

Caddis hatches in particular often blanket the river, as the photo below can attest. There can also be several species of mayflies as well as stoneflies. Because of all the bugs, we typically have clients fish dries and dry-dropper combos when feasible. The best dry and dry-dropper fishing here occurs when cloud cover is heavy. The Lower Madison is a shallow stretch of river, so the fish often don’t rise when the sun’s bright for fear of ospreys and eagles.

Vast numbers of caddisflies on the Lower Madison.

Most rising trout on the Lower Madison run small. The fish above was a very good rainbow for the dry-dropper technique. Most fish caught this way except during ideal weather conditions will run smaller. Small browns and rainbows are most common, but there are also good numbers of westslope cutthroat now, a new addition to the Lower Madison in the past few years. Like all cutthroat trout, these westslopes like to rise. They average a bit larger than most of the rainbows and browns we see rising. The fish below is a good example.

We often fish quite slowly on Lower Madison floats, especially when the trout start rising. There are many good riffles and islands where the guide can stop the boat to let anglers work to pods of rising fish, and anglers so inclined also have the opportunity to get out and wade fish good spots. In general, we’ll fish a longer float and move faster when fish aren’t likely to rise, and fish slow and methodical when the weather and water conditions look conducive to hatches.

Average westslope cutthroat from the Lower Madison. The numbers of these native trout are increasing due to a successful reintroduction effort.