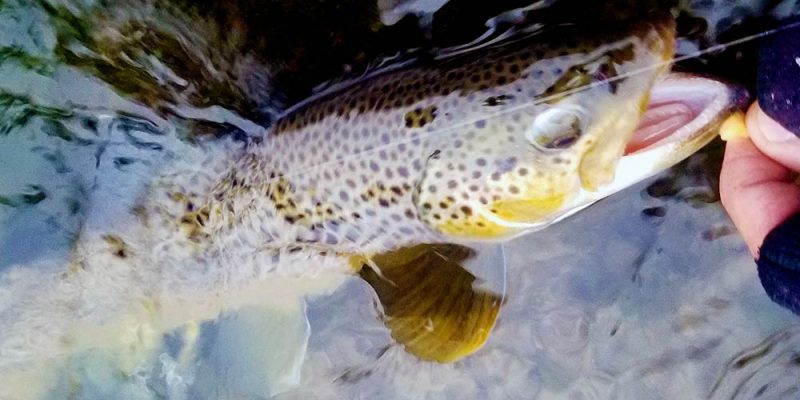 The transition from early autumn to late is based on light levels, water temperatures, and weather. Basically, once there have been several days in a row with daytime highs under 50 degrees and nights in the high teens or even lower, and some snow has stuck around for a day or two even at valley level, it’s late autumn. Usually this means the month of October and early November.

The weather now is often dreadful. The best fishing takes place when it is dreadful, which means good waders, a good waterproof jacket, several layers underneath both waders and jacket, and a warm hat and gloves are required. That said, the fishing can still be solid on the occasional Indian summer sort of day, as the picture below shows. Crowding is more likely when it’s warm and bright, of course. 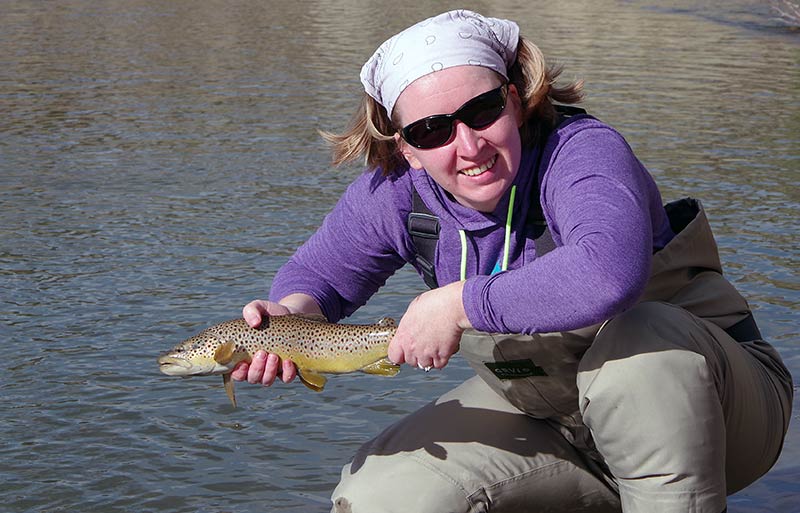 Most fisheries in Yellowstone Park are no longer worth fishing. Small creek, including famous names like Soda Butte Creek, often show ice in the backwaters and hold fish that have gone into their winter stupors. These fish may feed an hour each afternoon, but they may not really feed at all. Larger rivers like the Lamar and the Yellowstone in its Grand Canyon may still be worth it on warm afternoons, particularly early in October, but they’re not the stars of the show, either.

Instead, virtually all the good October fishing in Yellowstone occurs medium-sized and larger rivers that possess one or preferably both of the following features:

For our guide service, the browns are the main show. While we fish portions of the Black and Grand Canyons of the Yellowstone some in early October, and once in a blue moon run a guided trip for small resident trout on the Firehole, the vast majority of our guiding and fishing in late fall relates in some ways to the brown trout.

Don’t get me wrong. We’ll fish dry flies when the fish are going wild for them, but unlike summer when dry fly fishing is our preferred tactic, in late fall it’s the side dish rather than the main course. 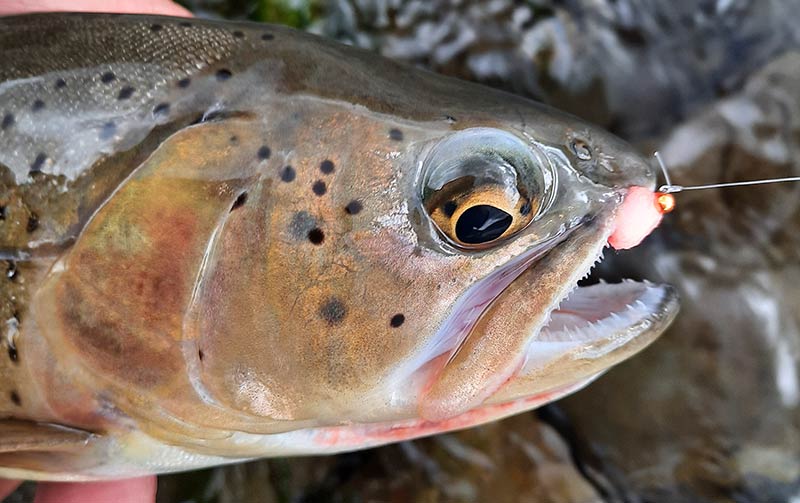 Rainbow, cutthroat, and cutt-bow trout like this one gorge on brown trout eggs and often see little pressure from anglers in October.

Late fall fishing is primarily nymph-fishing, with large stonefly nymphs trailing either some sort of small attractor nymph or an egg fly. While conventional wisdom might state that the non-spawning trout would tend to eat the eggs and small flies and the big angry spawners would be more likely to eat the stonefly nymphs, sometimes the reverse is true and the big fish eat the small bugs. We mark this down to pressure.

Keep that in the back of your mind: the heavier the pressure, the more likely the conventional “big nasty” stuff doesn’t work as well as small stuff. Streamers can also work, especially when the weather is ugly and pressure is low.

All of the above fishing is great fun for experienced anglers, but usually pretty tough for beginners. While our Yellowstone fishing guides are certainly willing to guide beginners in late fall, this is not the easiest time for them. It’s a particularly poor choice for young kids, since the cold weather and danger of falling into cold weather makes things miserable and perhaps hazardous for people who haven’t hit their growth spurts yet.

Brown trout get dark and colorful as the spawn approaches. This one was caught in early October about 10 days before the spawn begins.

Most October fishing trips in Yellowstone are half-day trips. Since even the light-sensitive browns are now eager to eat throughout the day and angling crowds are almost nonexistent in the right places, there’s no need to get out at the crack of dawn when in might be ten or fifteen degrees. We’ll instead usually fish from just after lunch until sunset, prime time in the first case for BWO activity and in the latter for the largest browns.

Montana walk & wade trips and Private spring creeks also turn on strong at this time, with the same runs of browns that drive the Yellowstone Park fishing. They’re also the only opportunity for the above fishing after Yellowstone Park closes to angling at sunset on the first Sunday in November.